The early English epic Beowulf is filled with a marvelous hero, ghastly villains, far off lands, and deeds of great valor. These are someof the reasons why Beowulf is a great example of an early English epic. Beowulf is an epic because it has action that consists of deeds of great valor, the setting of Beowulf is in vast scope covering great lands and far off places, and the hero of the story, Beowulf, is of imposing stature of international and international importance.

One reason that Beowulf is an epic is because the action consists of deeds of great valor. Beowulf told a story of when he killed nine sea-beasts with his sword. He also said,” I returned from a fight when I destroyed five a family of giants,” which proves the great strength that Beowulf had. When Beowulf talked about going to fight Grendel, he denied himself the use of a sword because he wanted a fair hand-to-hand fight with Grendel. When one of Hroathgars’ coast guards set eyes upon Beowulf he said,”I have never set eyes on 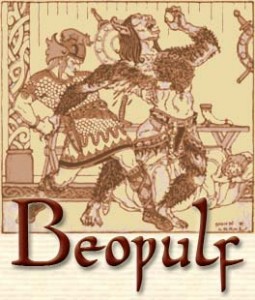 a more noble man, you are no mere retainer.”

Although the action in Beowulf consists of great deeds, the setting of the story is vast scope covering great lands and far off places. Beowulf said that his father was favored far and wide because he was a very noble lord. “The swift current, the surging water carried me to the far off Land of the Lapps,” said Beowulf as he told a story to one of Hroathgars’ retainers. When Beowulf talked of where Grendel lived he said,”These two live in a little known country with wolf-slopes, windswept headlands where a mountain stream plunges.”

The protagonist of Beowulf, Beowulf, is a figure of national and international importance with great historical and legendary significance. “Then he who feared no man, the proud leader of the Geats,” said the author about Beowulf before he went to seek Grendel. Another example the narrator uses to show the importance of Beowulf is, “Truly, the leader of the Geats fervently trusted in his own strength and in God’s grace.” Once more the narrator said this of Beowulf,”One of the Hygelacs thanes, Beowulf by name, renounced among the Geats for his great bravery.”

Since Beowulf contains action that consists of deeds of great valor, the scope is in vast setting covering great lands and far off places. Also the hero of the story is a figure of imposing stature of national and international importance, Beowulf is a great example of an early English epic.