Billy Budd– He is a bright-eyed, twenty-one year old forewoman of the British Fleet. An orphan, he is tall, athletic, friendly, innocent, and 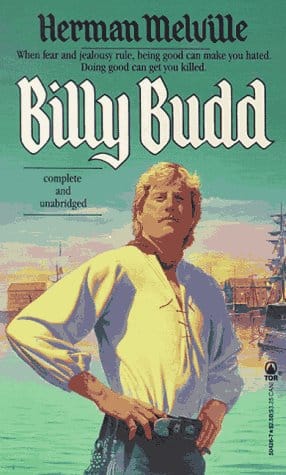 helpful. He is a loyal friend, and a fierce fighter. All the officers like him except for Claggart.

Claggart– The Master-at-Arms that is envious and jealous of Billy Budd. He is out to make Billy’s life miserable and is the cause of Billy Budd’s execution.

Captain Vere– The Honorable Edward Fairfax Vere is a bachelor of about forty. He has a nickname of “Starry Vere.” Captain Vere is forced to execute Billy Budd though he knew of his innocence. But nevertheless

Dansker– A veteran sailor who has taken a liking to Billy Budd. Tells Billy that Claggart doesn’t like him. He is also one of the most important members of the crew.

The book starts out with the author remembering seeing a handsome man many years ago. He is reminded of this by the Handsome Sailor, Billy Budd. Billy is twenty- one, a foretopeman of the British fleet who impressed Lieutenant Ratcliffe of the H.M.S. Indomitable. Billy leaves his ship the Rights of Man, and joins the H.M.S. Indomitable. He is received well by the crew and they like him lots. An officer asks him about whom his parents are and he replies that he doesn’t know. He was found in a basket hung on a man’s door handle in Bristol. Billy seems to be practically perfect, but he does have one weakness. When he is strongly provoked, he is inclined to stutter, or may even become speechless. The author tells us of the uprisings in the British navy. It is later called the Great Mutiny. They sail for the Mediterranean and have uneasiness about them as they watch for signs of trouble or discontent.

Billy had seen the gangway punishment, and was determined that he would always perform his duties well, and that his actions would never cause him to get yelled at. Though he had made that resolution, he was occasionally getting into slight trouble. He is confused by this, and goes to Dansker, who seems to have taken a liking to him. Billy asks him for his opinion, and he says that it is because Claggart doesn’t like Billy. That with all evidence to the contrary, he despises him. The day after the discussion with Dansker, Billy spills soup on the freshly cleaned deck just as Claggart passes by him. Claggart notices that it was Billy that spilled the soup, and only taps him lightly with his rattan. The book seems to say that Claggart has an inborn wickedness in him. Claggart and the Captain seem to be the only two on the ship that can see the unique innocence in Billy Budd. This perception aggravates Claggart’s jealously even more. Squeak has sensed Claggart’s envy of Billy Budd, and makes up mean names for him, which he tells Claggart are the sort of things that Billy is saying about him. A few days after he spilled the soup, someone was trying to wake him by whispering in his ear. They said to meet on a secluded platform on the deck. He hinted to what it was about. It was very vague. When Billy went to meet the mysterious man, he wasn’t able to see his face because it was in the shadows, but he could tell that the person was one of the afterguardsmen. The sailor said that there was a gang of men that were impressed into service just as Billy had been, and he wanted to know if Billy wanted to join them. The sailor offered Billy what looked like gold coins. Billy was angered greatly by this, and stutters and threatens to throw the sailor overboard. The sailor is offended and runs away.

After the incident with the afterguardsman, Billy tells his friend, the Dansker, some of the details of what happened. Billy doesn’t tell the Dansker that it was an afterguardsman, and the Dansker says that Claggart is out to get him. It makes Billy wonder what Claggart has to do with all of it. Billy disregards what the Dansker has told him about Claggart, even though the master-at-arms acts weird around him sometimes. He doesn’t realize that beneath Claggart’s calm surface, there is a jealous man that is out to get him. A few day later, Claggart approaches Captain Vere and tells him that one of the sailors is a dangerous man who is planning something dangerous among the crew. The Captain becomes impatient with Claggart and interrupts him, demanding to know who this dangerous sailor is. Claggart says he is “William Budd.” The Captain is surprised with this accusation and wonders what the best way to silence the matter as quickly as possible. Captain Vere decides to bring Billy Budd and Claggart together into his cabin so that they may close the matter when Claggart’s allegations are proved false. Claggart waits in the captain’s cabin while his personal attendant is sent to fetch Billy. Billy enters the captain’s cabin and notices that Claggart is present. He is not alarmed, but rather surprised. Captain Vere tells Claggart to tell Billy face to face the accusations he had previously made. Claggart repeats the story to Billy, and he is speechless. Vere orders Billy to speak in his own defense, but Billy is still tongue-tied and can’t seem to be able to find his voice. After an instant more of silence, Billy’s arm lashes out and strikes Claggart on the forehead. He falls to the ground dead. Billy and the Captain try to revive Claggart, but he is definitely lifeless. The Captain regains his official composure and orders Billy to wait in the rear stateroom. He sends for the ship’s surgeon who confirms that Claggart is dead. Captain Vere tells the surgeon that he will quickly call a drum-head court, and to tell the ship’s officers, but not anyone else. The surgeon disapproves of the Captains order to call a drum-head court, yet he can do nothing about it. Other lieutenants and the marine captain share his amazement and dismay. The drum-head court is put together, and Captain Vere is the only witness. Billy admits to having killed the master-at-arms, but says that Claggart was lying. He is very sorry that he is dead, but never meant to kill the man. Captain Vere urges the court to be compassionate with their ruling. Billy is convicted and sentenced to be hanged at the yardarm in the early morning. Chapters 24-31 Pages 95-116 The crew is summoned on deck, where the captain tells them what has happened. The sailors are astonished by what they hear. They can’t believe it. Claggart’s body is then buried at sea according to the rituals of his naval rank. Billy is put in irons and is visited by the chaplain. He doesn’t seem to see the chaplain so he goes, but returns again around midnight. The chaplain tries to tell Billy about God, but he just listens politely even though he does not know what the chaplain is talking about. Everyone is called on deck to watch the execution. The last words that Billy Budd says are “God bless Captain Vere!” They return to the English fleet in the Mediterranean, where the ship meets hostility. In the battle, Captain Vere is hit and seriously wounded by a musket ball. The senior lieutenant captures the enemy ship and takes both ships into Gibraltar. Captain Vere is dying, and on shore he is heard to murmur to his attendant, the words- “Billy Budd, Billy Budd.” A few weeks later, in a Navy Chronicle, a passage said that there was a man named Billy Budd that had stabbed Claggart. It also stated that Billy Budd was not an Englishman, but an alien taking on an English name. In the navy, anything that has to do with an incident that happened in the service, is converted into a monument. The spar from which Billy Budd was hung became so important to some sailors that a chip of it became like a piece of the cross. Though they do not know the whole story of the incident, they know subconsciously that Billy could not be guilty of mutiny, or intentional murderer.