Probably the most commonly known example of bioluminescence by North Americans is the firefly, which lights its abdomen during its mating season to communicate with potential mates.  This bioluminescent ability occurs in 25 different phyla many of which are totally unrelated and diverse with the phylum Fungi included in this list (an illustration of bioluminescent fungi is displayed in figure 1).

One of the features of biological light that distinguishes it from other forms of light is that it is cold light. Unlike the light of a candle, a lightbulb, bioluminescent light is produced with very little heat radiation. This aspect of bioluminescence especially interested early scientists who explored it. The light is the result of a biochemical reaction in which the oxidation of a compound called “Luciferin” and the reaction was catalyzed by an enzyme called “Luciferase”.

The light generated by this biochemical reaction has been utilized by scientists as a bioindicator for Tuberculosis as well as heavy metals. Ongoing research involving bioluminescence is currently underway in the areas of evolution, ecology, histology, physiology, biochemistry, and biomedical applications.

The light of luminous wood was first noted in the early writings of Aristotle which occurred in 382 B.C.(Johnson and Yata 1966 and Newton 1952)

The next mention of luminous wood in the literature occurred in 1667 by  Robert Boyle who noticed glowing earth and noted that heat was absent from the light.  Many early scientists such as Conrad Gesner, Francis Bacon, and Thomas Bartholin all observed and made notations of luminous earth (Johnson and Yata 1966 and Newton 1952).  These early observers thought that the light was due to small insects or animal interactions.

The first mention that the light of luminous wood was due to fungi occurred from a study of luminous timbers used as supports in mines by Bishoff in 1823. This opened the way for further study by many other scientists and by 1855 modern experimental work began by Fabre (Newton 1952).  Fabre established the basic parameters of bioluminescent fungi, those being:

The work by Herring (1978) found that the luminescent parts of the included pileus(cap), hymenium(gills) and the mycelial threads in combination or separately(figure 2) also the individual spores were also seen to be luminescent.

READ:
What is light? Sources of Light

Herring also stated that if the fruiting body (mushroom) was bioluminescent then the mycelial threads were always luminescent as well but not vice versa.

From the 1850’s to the early part of the 20th century the identification of the majority of fungal species exhibiting bioluminescent traits was completed.  The research of bioluminescent fungi stagnated from the 1920’s till 1950’s (Newton 1952 and Herring 1978 ).

After which extensive research began involving the mechanisms of bioluminescence and is still carried out to the present.

The Process of Bioluminescence

Bioluminescence results because of a certain Biochemical reaction. This can be described as a chemiluminescent reaction which involves a direct conversion of chemical energy transformed to light energy ( Burr 1985, Patel 1997 and Herring1978). The reaction involves the following elements:

A simplified formula of the bioluminescent reaction:

1) The reaction involves a substrate (D-Luciferin), combining with ATP, and oxygen which is controlled by the enzyme (Luciferase). Luciferins and Luciferase differ chemically in different organisms but they all require molecular energy (ATP) for the reaction.

2)  The chemical energy in stage one excites a specific molecule (The Luminescent Molecule: the combining of Luciferase and Luciferin). The excitement is caused by the increased energy level of the luminescent molecule.

The result of this excitement is decay which is manifested in the form of photon emissions, which produces the light. The light given off does not depend on light or other energy taken in by the organism and is just the byproduct of the chemical reaction and is therefore cold light.

The bioluminescence in fungi occurs intracellularly and has been noted at the spore level (Burr 1985, Newton 1952 and Herring 1978).  This may at times be mistaken for an extracellular source of light but this is due to the diffusion of the light through the cells of the fungus.

In examining the photograph in figure 1, it appears that the cap of the fungus is glowing but after study, it was observed that just the gill structures that emit the light and the cap (which is thin) emit the light of the gills by diffusion(Herring 1978). 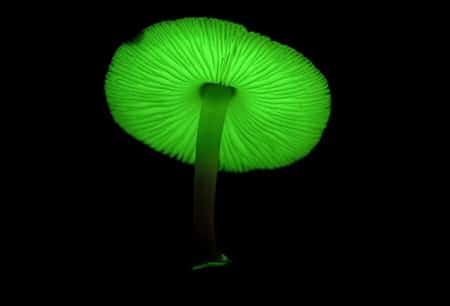 Majority of bioluminescence occurs in the Basidiomycetes and only one observation has been made involving the Ascomycetes; specifically in the Ascomycete genus Xylaria (Harvey 1952).

At present, there are 42 confirmed bioluminescent Basidiomycetes that occur worldwide and share no resemblance to each other visually, other than the ability to be bioluminescent.

Of these 42 species that have been confirmed 24 of these have been identified just in the past 20 years and as such many more species may exhibit this trait but are yet to be found.

The two main genuses that display bioluminescence are the genus Pleurotus which have at present 12 species which occur in continental Europe and Asia.  The genuses Mycena have 19 species identified to date with a worldwide distribution range.

After examining the literature and a mushroom field guide book it was evident that there was no correlation between the edibility of the mushroom and its bioluminescence.  Some mushrooms such as Armillaria mellea the Honey mushroom was listed as being excellent to eat. While the Jack O’Latern – Omphalalotus olearius was listed as poisonous and caused severe gastrointestinal cramps.

The edible merits of the common Mycea were unknown and while Panus stypticus was listed as poisonous it was found to contain a clotting agent and useful in stopping bleeding (Lincoff 1981, Newton 1952 and Herring 1978). As only a field guide to North American mushrooms was available, only the North American varieties were examined.  If all 42 species of bioluminescent basidiomycetes were included in the search, a possible correlation may have been found.

Hi, there is a mistake made in your formula. You described Oxygen as a catalist in the formula, but actually Luceferine gets oxidized under influence of the the enzym Luciferase. The endproduct is actually oxyluciferine + light (photons).

Hi, bacteria haven’t been counted as part of the kingdom Fungi since perhaps the 1950s!

I am interested in contacting the copyright owner of the image of the mushroom fluorescing. Could you please forward my email to the correct person?

Thank you for your time.