In the novel A Tale of Two Cities, by Charles Dickens, the author uses many minor characters. Although labeled “minor”, these characters contribute fully, and are essential to the depth and excitement of the novel. Three such characters are: Miss Pross, Gaspard, and Jerry Cruncher. These three characters take on a couple different roles, depending on what point in the novel one is at. From the beginning, and 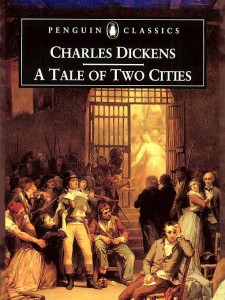 throughout the novel, Miss Pross plays a simple role.

She takes care of Lucie Manette. A simple role it may seem to be, but she adds humor to the story from the offset. Once Lucie and Dr. Manette have returned to England, after Dr. Manette’s imprisonment, Miss Pross continues to take an influential role in the story. She is constantly looking after Lucie and this includes Miss Pross attempting to discourage any suitors. Miss Pross is quite successful at appearing and acting in a commanding and intimidating manner. An example of this is when Mr. Lorry came to visit at the Manette’s home; “…Miss Pross, the wild red woman, strong of hand…`I don’t want dozens of people who are not all worthy of Ladybird, to come looking after her….to take Ladybird’s affections away from me.'” Miss Pross being part of the novel deepens the plot by providing some humor and giving the reader another side to consider when thinking of Lucie and her several relationships. Gaspard’s purpose in the novel is dissimilar to that of Miss Pross. Gaspard is used to help the reader understand how the majority of the French population was feeling prior to the revolution. Gaspard and the other peasants were treated, by the aristocracy, as if they were disgusting rodents. When Gaspard’s son is run over by the Marquis, all the Marquis is worried about, is if his horses or his coach were hurt or damaged. Gaspard’s anger and realization of how he is being treated causes him to rebel and kill the Marquis. The one murder symbolizes the animosity of all the peasants and is a taste of what is to come with the revolution.

Gaspard was therefore used to foreshadow what is to happen in the future, this is auvioce especially after Gaspard is captured and hung. He is left hanging with a knife in him so that he poisons the water. Later that afternoon the Jacquerie are talking in Defarge’s wine shop of how “the chateau and all the race…” are doomed for “…Extermination.” Jerry Cruncher is a minor character who serves two purposes. What seems to be his primary purpose at the beginning of the novel is very different from his purpose towards the end. At the beginning he is usually mentioned to provide humor in a realistic fashion. This is done when Dickens shows Jerry’s level of intelligence by describing how he confuses and twists things that people say. Jerry Cruncher’s second purpose is not illustrated until very late in the novel. This second purpose is to display how viewing the vile revolution made him change his ways so that he was no longer a “resurrection man.” This helps support the graphic detail Dickens is already using in describing the horrors of the revolution. After all, if a man who made a living by robbing graves is sickened by the ghastliness of the revolution then it must have really been awful. Miss Pross, Gaspard, and Jerry Cruncher all are minor characters that contribute to the depth of the plot, and the humor and excitement of the novel.