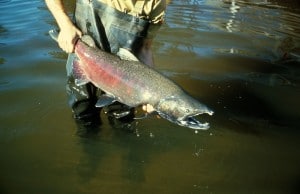 Hydropower is a very good alternative resource for power, however it is very damaging to our salmon populations.  The dams block off rivers, which block the salmon’s path back to their breeding grounds.  The salmon go back to the same areas, just as their ancestors did, to lay their eggs. The hydropower plant’s turbines are also very dangerous to young salmon. Many of them are killed by the giant turbines on their way back to the ocean. Killing off many of the salmons new generation.  Pollution is also a killer of many Chinook salmon.

Pollution caused by sewage, farming, grazing, logging and mining find it’s way into our waters.  These harmful substances kill many species of fish and other marine life.  The Chinook salmon is no exception. The chemicals are dumped into the rivers and streams and eventually these chemicals find their way to the ocean, polluting and affecting each area they pass through. The largest contributor to the decline in the Chinook salmon population is the commercial fishing industry. From a period of 1990-1992 815,000 Chinook salmon were caught by commercial fisheries.  This does not include the 354,000 recreational catches.  Commercial fishing is a big industry.

Commercial fishers use nets, which they pull by boats. Some nets are designed so the holes in the nets are large enough for the head of the fish to fit through, and then the mesh gets caught in the fish’s gills.  Others are designed to circle around a school of fish and then is drawn shut.  New technologies have developed factory stern trawlers which easily haul netloads of up to 100 metric tons of fish. However, when catching the salmon, fisherman use pound nets to catch the fish on their way to their spawning grounds. The average annual salmon catch in just the United States is about 300 million pounds, of that about 60 percent is canned. Salmon canning is one of the major industries of the pacific coast. To decrease the rate at which the salmon population is falling the U.S. Fish and Wildlife service yearly deposits billions of young salmon and eggs into natural breeding grounds. Salmon are also raised in and then deposited.

READ:
What is Cultural Anthropology

The National Marine Fisheries Service has also proposed a recovery plan for the Chinook salmon. They plan to improve migration conditions, by increasing the area around the dams so that the salmon can get through.  Also they plan to protect the fishes’ spawning habitat, by improving the general management. They would also like to develop alternative harvesting methods. The effects that man has had on the Chinook salmon and many other species of salmon is very severe, any are labeled as threatened.  We can reduce the causes of their population decrease by reducing the amount of fish we catch annually, reducing pollution dumped into their habitats, and by developing ways for the fish to bypass the dams.