The play “Oedipus Rex” is a very full and lively one to say the least. Everything a reader could ask for is included in this play. There is excitement, suspense, happiness, sorrow, and much more. Truth is the main theme of the play. Oedipus cannot accept the truth as it comes to 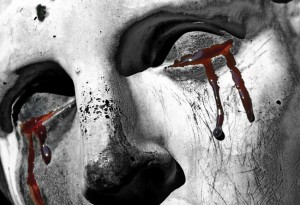 him or even where it comes from. He is blinded in his own life, trying to ignore the truth of his life. Oedipus will find out that truth is truth, it is rock solid. The story is mainly about a young man named Oedipus who is trying to find out more knowledge than he can handle. The story starts off by telling us that Oedipus has seen his moira, his fate, and finds out that in the future he will end up killing his father and marrying his mother.

Thinking that his mother and father were Polybos and Merope, the only parents he knew, he ran away from home and went far away so he could change his fate and not end up harming his family. Oedipus will later find out that he cannot change fate because he has no control over it, only the God’s can control what happens. Oedipus is a very healthy person with a strong willed mind who will never give up until he gets what he wants. Unfortunately, in this story these will not be good trait to have. Oedipus goes on with his journey not knowing about what he is going to do next. Oedipus runs into some people at a crossing on this journey and quarrels with them to there death. After this, he goes along to a city named Thebes where he outsmarted a beast that was cursing the city. He received praise and joy. While gaining the trust of all that lived there he quickly became King of Thebes. The people loved him because he was such a great leader. He was such a great king because he had a lot of love for his people and would do anything in his power to make them happy.

As a result of this, Oedipus finds out that the city is in trouble unless the killer of their late king is found and punished. Little does Oedipus know that he is the killer of their late King or that the King was actually his father. Oedipus will strive for answers even though he has been warned not to dig to deep, for he will regret it. Being the stubborn person that he was, he forced everyone to tell what they knew about the Kings death. Forcing and forcing more, the King found out all about his childhood. He ended up with different parents after his mother abandoned him at birth because of the Oracle that they received telling them that there son would end up killing his father, which he did anyway. Oedipus’s mother has the same blindness that he has, she thinks that she can change fate. Oedipus was found to be guilty of killing the late King, also his father. His mother, now his wife, was proof that you cannot change fate no matter what you do. In disgust, Oedipus physically blinded himself so he can never see what he has done again and banishes himself from civilization forever. Sophocles uses the word blindness in many different ways. He makes it a big part of the play. It is ironic that a blind person can see the future and the real meaning of life while Oedipus only sees what he wants to see and blinds himself mentally of what he does not want to see. Oedipus is a man ignorant to the true appearance of things. Towards the end of the play things change for him.

Everything is too clear of what the truth is and he shows that he is a coward by trying to avoid his fate once more by blinding himself physically. “Oedipus Rex” was one of the greatest plays ever written. The major themes in the play were outstanding and it makes you think about truth and how important and strong it really is. The way Sophocles uses the word blind in the story made it worth while. Piecing it all together made the play a lot more interesting than most other plays. “The truth will set you free” is a famous saying that Oedipus should have not listened to and should have not looked for.