The Last Supper, by Dan Rosen, supposedly dares to take on deep subjects in a vein of sarcastic humor. But, what it says is that liberals, because of their belief, have the right to pass death sentences on opponents. The story was amusing at times and there was some comedy in the film, but it didn’t really go anywhere. The most famous actor in the film was Mark Harmon, and they showed him for about one minute, before he got killed.

The movie takes place in Ames, Iowa. The film is about five liberal graduate students living together, (three males and two females) that enjoy 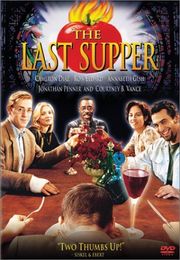 inviting different guest over every Sunday for dinner. The students indulge their sense of superiority by inviting those that they regard as being less enlightened. They enjoy having different types of discussions dealing with all different types of topics. Their first guest that we see, ends up being a trucker who gives one of the five students a lift home because his car broke down. They invite the trucker in to eat, because they had an extra seat at the table and their originally invited guest could not make it for dinner. The trucker ends up being an anti-Semite and he is also an ex-marine. Immediately after the trucker sits down at the table to eat he starts pointing out to the five students that he hates Jews and that they always try to bargain down anything that they buy. All five of the students are stunned by the remarks that the trucker is making, especially one of the students that is Jewish. They all get into a heated argument and the trucker goes out of control; in addition, he grabs the Jewish student and puts a knife to his throat. They are all shocked by this and they immediately attempt to calm the trucker down. He releases the Jewish student and then breaks an arm of another student who was trying to free the Jewish student. The Jewish student picks up a butcher’s knife and stabs the trucker in the back, which eventually kills the trucker. At this point the movie picks up a little. They all begin to contemplate about what to do with the body. They decide on burying the body in the back yard. They said it would cause a lot of problems if they contacted the police. They all agreed at this time that killing the trucker was only good for society. After they had buried the trucker they all sat down and they decided that from now on they would poison their guest depending on whether they thought that the guest was harmful to society.

Their next guest was a Priest, who really thought that the gay movement was wrong. The priest believed that being a homosexual was really a disease and that AIDS was the cure for this disease. They quickly poured him a glass of poisonous wine and he was killed soon afterwards. It became sort of a game because the guests wouldn’t even make it to the salad before dying. In total they had killed about eleven people including a seventeen-year old girl who was against the distribution of condoms and the teaching of sex education in high school. I think that at this point they all have realized that everything has really gotten out of control.

The director seems to miss out on a few flaws that I observed while watching the film. When the trucker breaks one of the student’s arms, nonetheless, you see the student with a cast in the following scene. The scene after that you see the student using a rifle and playing a game called skeet shooting. That is where a disk is thrown into the air and the person with the rifle attempts to shoot it down. In that particular scene he doesn’t have a cast on his arm. Two scenes later you see the same student playing a game of skeet shooting again and all of a sudden he has the cast on his arm and he is firing the gun just fine. Did the director forget to observe that scene? I guess it was such a low budget film that they could not afford to hire some professional editors. The director shows some very symbolic scenes in the movie, and that is where small bushes begin growing from each grave in the yard. Later on in the movie the bushes had tomatoes growing from them. These tomatoes symbolized the blood of the people that the students had killed. These tomatoes were extremely large, red and they were very sweet. This goes to show that the people that they had killed had so much hatred in them that they were blocking all the good they had to offer. Once they were dead there wasn’t any hatred left and these tomatoes symbolize all the good within these people that was stuck inside of them for so many years. It is also very interesting to point out how the director chronologically places each death into a certain order. The first killing in the movie begins with the worst of all the people, and that is the trucker. Worst, meaning that it seemed as though he was filled with the most hatred towards society. The killings there afterwards were pretty much pointless because a person shouldn’t be killed for something that he/she believes in. All of the people that died had a belief in something and there are many different ways of changing somebody’s ideas without having to kill them. The director has a problem: her narrative style remains conventional and unsurprising even as her story seeks to outrage. The film’s wide-angle dinner scenes repeat one another without escalating much, and what leads up to them is of far less interest.

Through viewing this movie you can determine that these five liberal students were in a way followers of the Machiavellian theory. Nicolo Machiavelli, was a celebrated political and military theorist, historian, playwright, diplomat, and military planner. His theory can be related to the way these five students were thinking. For example, he raises the point of a person who puts another in power “is ruined himself: for that power is produced by him either through craft or force; and both of these are suspected by the one who has been raised to power.” Note that he does not say that it only happens sometimes, but every time. He states it without making excuses for that kind of action but puts the rule for as fact. The students were thinking, and they concluded that, through execution these people would never have anything to do with in society. Figuratively speaking, these students were avoiding any way possible of letting any of the people killed, to have power in society.

The group mantra is a party-game moral dilemma: If you had met Hitler in 1909, and knew what he was going to do, wouldn’t you poison him? The mantra flops in two ways. Unlike most such party posers, it has no link with reality: How could you possibly have known what lay ahead of Hitler? Second, this group knows no such vastly horrible future about any of the people that they killed: Each is just a soldier in the ranks of rightism. Although, to make us feel a little bit better, the director later lets us know that the truck driver was a child rapist and a murderer. These students are supposed to be ultra-rational. Well, perhaps we are being shown the dangers of ultra-rationality and the ability of not being able to control oneself. Finally, they then invite a conservative TV talker, who turns the tables on them. While they are eating dinner one of the guys decides to pour the TV talker some wine; consequently, one of the girls grabs the bottle and says that the wine is very old. They all look at her as if she has gone crazy. They all excuse themselves from the table and leave the TV talker alone in the room. When they return he has already poured everybody some wine and proposes a toast. The five liberal students drink and they all die.