When people hear the word “rape” they might imagine a stranger leaping out from the shadows of a dark alley and attacking someone. Although this is partly true, most rapes are committed by people who know their victims. When intercourse is unwanted and forced upon by someone you know, it is known as “date rape.” It occurs daily and is prevalent on virtually all college campuses across the nation and in cities all over the world.

Date rape generally occurs when a man is alone with a woman. Although it has been reported that men have been raped by women, it is much 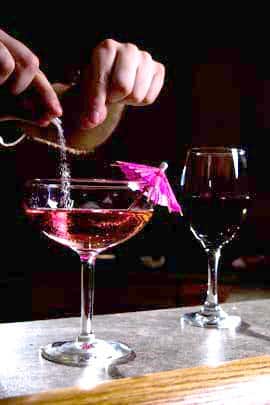 more common for a woman to be raped by a man. There are several reasons why date rape might occur. Sometimes a man thinks that a woman “owes” him something if he has taken her out for dinner and a movie or if a woman acts in a friendly manner towards him. The presence of drugs and alcohol are also a contributing factor to the occurrence of date rape.

An example of date rape that occurs commonly, especially within a college campus, is when both the man and women are drunk. In an environment such as a college or university, parties are commonplace for students. It is a place where friends can gather, listen to loud music, and get loaded. Typically, a man will coerce a woman back to his apartment or dorm. This is dangerous for both parties. The man may think that the woman is leading him on, that if she agrees to go with him that it is an invitation to have sex. If the female seems to be enjoying kissing or fooling around with the guy, he may think she is teasing him if she decides to stop. The man may feel angry or rejected if this happens, and may want sexual gratification anyway. The result can be rape.

If only the woman is drunk, the man may see this as an opportunity to take advantage of her because she will most likely be less defensive towards him. Some men plan the act of rape, and may use alcohol or drugs in order to lesson a woman’s judgment. In some cases, someone may slip a drug into a women’s drink, causing her to forget what had happened the night before when she wakes the next morning. If a woman is intoxicated and has seemingly consented to having sex, she may feel the next morning that she only acted that way because of the her condition at the time. In a court of law, the man would be found guilty of rape.

Even if substance use is not involved, another factor is mixed signals between the man and the woman. If a woman acts in a friendly or outgoing manner towards a man, he may interpret this as a proposal to have sex. Even if a woman says “no,” the man may think that she is playing hard to get, that the “no” really means “yes.” Some men are sexually aroused when a woman struggles, and may continue in an aggressive no matter what she says to him. This can occur to people who have just met, those who are dating, or even to people who have known each other for years.

There is a thin line between what is known as “mutual consent” and “date rape.” They can be confusingly similar because a women may give consent at the time, but if she is high or drunk, though, she may find the next day that she did want to have sex. It is difficult to say when a woman has given her consent because in many cases, at least one of the people involved is under the influence and cannot give genuine consent. When that line is crossed, it is date rape. Some men feel that just the fact that a woman is alone with him is willing consent to having sex whether she says “no” or not. But the fact is that if she is not sober and in a correct state of mind, she cannot consent to have sex.

There are many contributing factors to the increased date rape that occurs. Alcohol and drugs obviously play a large role. Some may say that women wearing loose or revealing attire is an open invite to men. Others say that pornography desensitizes men to women so that they do not know when a woman is or is not willing to have sex. Men who are sexually frustrated often attempt to rape women they know because they cannot get sexual contentment any other way.

Whatever the reasons, date rape is a commonly occurring but very scarcely reported act. It is usually more traumatic to a woman than being raped by a stranger especially if the woman had known or trusted the man before. Date rape is a problem that that involves everyone today, men and women. Date rape prevention programs need to be taught to people everywhere so that women know how to protect themselves and so men can understand the issue of rape and that when a woman says “no,” you must stop. If we can educate ourselves on the dangers of date rape, we can make the environment in which we live safer for everyone.