The movie “Disaster at Hillsborough” showed the complexity of a stampede. From the build-up of people outside the gate, to the disaster that 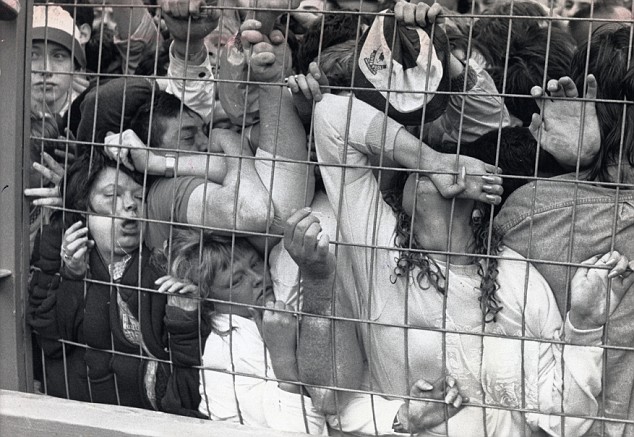 ended in the death of 95 people. The stadium was not equipped for the masses of people to show up all at the same place at the same time. According to the officer interviewed there was no plan in case of an emergency and no problems anticipated. The atmosphere outside the gates was pleasant and people were looking forward to a good game. The stampede started when the people in the rear realized that the game was to start before they were going to get in. The stampede could possibly been averted if the kickoff were delayed but the man “in charge” refused to delay. Just as at the “Who” concert the people in the rear of the line were in an acquisitive panic to get into the stadium. This pressure was recognized by the police in the front of the line and due to poor communication nothing could be done to stop it. A large gate “gate C” was finally opened to let off the pressure in front. This is when the true disaster occurred. People funneled straight onto the already full pens and created the stampede which killed the 95 people. People in the rear were in an acquisitive panic and the people in the front who were getting crushed were in a fearful panic. The emergency gates would open but the police, not realizing the situation, kept people in and closed the gates.

This example could not be any more perfect to show a stampede and panic. All four components were met. (1) Partial entrapment; the reality is complete entrapment. As at the Who concert the only avenue of escape was blocked by the police. (2) Perceived threat; this comes from both ends of the panic. The people at the rear were threatened by the fact that they would miss the kickoff of the game or even not be able to get into the game. The people at the front were facing the threat of being crushed. (3) The partial breakdown of escape routes is obvious from the front. The gates to get out were blocked by the police and there was a high fence blocking everyone on all sides except the tunnel which was blocked by people trying to get into the pens. (4) Front to rear communications breakdown occurred when the people at the fence realized the situation and could not communicate it to the people at the rear to keep the people from crowding up the tunnel. The biggest thing that caused this disaster was the failure of control by police and the communication breakdown.

Can you please tell me the source of the photo on this webpage? I would like to use it in a college textbook and would need to request reprint permission from the rights holder. Thanks in advance for any help you can give me.