Divorce in the United States 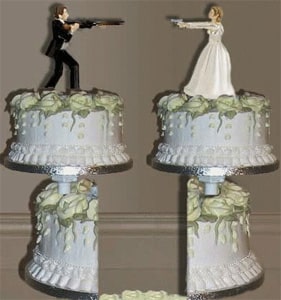 relationship. Divorce legally dissolves a marriage, and permits the partners to remarry if they choose.  Divorce differs from an annulment, which declares a marriage invalid because of some flaw in the contract. The early American settlers brought with them three different views on divorce:  1) the Roman Catholic view that marriage was a sacrament and that there could be no divorce; 2) the English view that divorce was a legislative matter; and 3) the Protestant view that marriage and divorce were secular matters to be handled by the civil authorities. The Constitution of the United States did nothing to limit the rights of the states to enact their own laws governing marriage and divorce.

Despite several efforts to amend the Constitution, to allow Congress to pass federal legislation on divorce, to this day the states retain separate laws.  Because divorce laws vary from state to state, the “migratory divorce” developed: couples would move temporarily to a state where divorce was easier to obtain than at home.  For example, a couple living in New York State, where until 1967 the only grounds for divorce was adultery, would establish residence in Nevada — a procedure that took only 6 weeks — and file for divorce on grounds of mental cruelty. Popular attitudes toward divorce changed as the United States became more urbanized and less religious.  The increasing acceptance of divorce was reflected in court interpretations of existing laws and in new legislation enacted by the states.  Two tendencies merged, making possible the establishment of new and easier grounds for divorce. The focus of state divorce, which previously concerned itself with specifying legal grounds for divorce, shifted to criteria concerning the breakdown of the marital relationship.  This could be seen in conditions that allowed divorce for alcoholism, drug addiction, or nonsupport.  Another tendency permitted divorce if both parties gave of voluntarily separating and living apart for a specified period of time.  For example, in 1967, New York allowed divorce for couples who had been legally separated for 2 years, eliminating the search for a guilty party.  In 1969, California permitted divorce when “irreconcilable differences” arose, thus becoming the first state with a “no-fault” divorce law.

Nearly all the other states soon added no-fault divorce options to their existing laws. Published statistics show that the United States has the highest divorce rate in the world, and in recent decades it has held fairly steady. In 1975 the rate was 4.9 per 1,000 people (over twice that of Great Britain) and in 1990 it was 4.7 per 1,000. It is sometimes said that in the United States, for every four marriages, a divorce occurs.  Divorce statistics, however, tend to be misleading. In 1990 about 2.4 million marriages took place in the United States and about 1.2 million

divorces — about one divorce occurred for every two marriages. It would be equally true, however, to say that 80 percent of all married people are still in their first marriage. Statisticians speak of the “crude” divorce rate — the number of divorces per 1,000 population. The crude divorce rate of 4.7 in 1990 in the United States may be compared with a crude marriage rate of 9.7 (9.7 marriages per 1,000 population). An even better measure is the number of marriages or divorces per 1,000 “population at risk,” that is, the total number of persons who are in fact married at the time.  In the United States in 1987, there were 123 divorced persons for every 1,000 married persons; in other terms, the divorced portion equaled about 12 percent of the married portion of the population. When marriage and divorce rates in several countries several factors must be taken into account: the proportion of the population that is of marrying age, the proportion that marry, and the age at marriage.  Because people now live longer and marry earlier, the size of the population “at risk” increases.

Only in Japan is the married proportion of the population as high as it is in the United States. Moreover, Americans who get divorced are likely to remarry.  In the mid-1980’s approximately 50% of divorced U.S. women remarried. Sixty years earlier, two out of three divorced persons did not remarry. If the divorce rate has risen noticeably, so has the marriage rate. Anthropologists report that many societies have even higher divorce rates than that of the United States.  For example, Nigeria would have a divorce rate approaching 100 percent if some married people did not die young.  The belief that high divorce rates reduce social organization has not been proved.  The social effects of divorce depend on what happens to families that experience it and on the arrangements society makes for them. Divorce can be a devastating experience.  While the divorce is in progress, and for some time afterward, both parties are likely to feel personally rejected, cheated in the economic arrangements, misrepresented legally, bitter about the co-parental arrangements, lonely because they have lost friends, and afraid of living alone. In the United States, the mother traditionally has been supported economically by the father, and granted custody of the children unless she is found unfit by the courts.  The father is usually awarded more material possessions and awarded the right to visit the children regularly.  Prolonged and bitter struggles for legal custody have often scarred both parents and children.

In extreme cases, the parent losing a custody conflict, or upset about material divisions may even resort to burglary or kidnapping his or her own children. In recent decades, however, other patterns of child custody and economic arrangement have emerged alongside the old.  Some mothers have voluntarily relinquished custody in order to pursue other goals, or because they believe the children may fare better with the father.  Joint custody has also become more common, with parents sharing responsibility for the raising of their children, even after remarriage.  Fair divisions of material possessions are rising as more women enter the work force and consequently contribute equally.      Divorce has become an ingrained part of American society — almost similar to marriage.  Previously, I believed that married couples with children should avoid divorce for the sake of their children.