Born September 30, 1928, Eliezer Wiesel led a life representative of many Jewish children. Growing up in a small village in Romania, his world revolved around family, religious study, community and God.

Yet his family, community and his innocent faith were destroyed upon the deportation of his village in 1944. Arguably the most powerful and 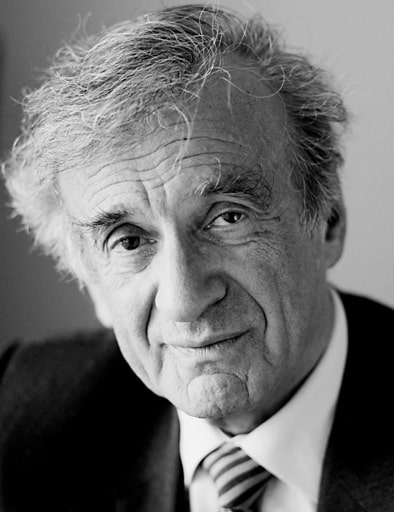 And Wiesel has since dedicated his life to ensuring that none of us forget what happened to the Jews. Wiesel survived Auschwitz, Buna, Buchenwald and Gleiwitz. After the liberation of the camps in April 1945, Wiesel spent a few years in a French orphanage and in 1948 began to study in Paris at the Sorbonne. He became involved in journalistic work with the French newspaper L’arche. He was acquainted with Nobel laureate Francois Mauriac, who eventually influenced Wiesel to break his vow of silence and write of his experience in the concentration camps, thus beginning a lifetime of service. Wiesel has since published over thirty books, earned the Nobel Peace Prize, been appointed to chair the President’s Commission on the Holocaust, awarded the Congressional Gold Medal of Achievement and more. Due to a fateful car accident in New York in 1956, Wiesel spent a year confined to a wheelchair while recovering. It was during this year that he made the decision to become a U.S. citizen and is still today an active figure within our society, as well as fulfilling his role in Jewish politics around the world. Wiesel’s job as chairman of the President’s Commission on the Holocaust was the planning of an American memorial to the victims of the Holocaust.

Wiesel writes that the reason for creating the museum must include; denying the Nazi’s a posthumous victory, honoring the last wish of victims to tell, and protecting the future of humanity from such evil recurring. Always maintaining his dedicated belief that although all the victims of the Holocaust were not Jewish, all Jews were victims of the Holocaust, Wiesel advocated placing the major emphasis of the memorial on the annihilation of the Jews, while still remembering the murder of other groups. Guided by the unique nature of the Holocaust and the moral obligation to remember, the Commission decided to divide and emphasize the museum into areas of memorial, museum, education, research, commemoration and action to prevent recurrence. In order to come to these decisions, a group of 57 members of the Commission and Advisory Board — including Senators, Rabbis, Christians, professors, judges, Congressmen, Priests, Jews, men and women — traveled to Eastern Europe, Denmark and Israel to study Holocaust memorials and cemeteries and to meet with other public officials.

The emotional pain and commitment required by such a trip is remarkable, and Wiesel’s leadership is undeniably noteworthy.  Wiesel remained chairman of the Committee until 1986. He has aided in the recognition and remembrance of Soviet Jews, the establishment of Israel and has dedicated the latter part of his life to the witness of the second-generation and the vital requirement that memory and action be carried on after the survivors have all left us. Wiesel’s own words are the best explanation: “Let us remember, let us remember the heroes of Warsaw, the martyrs of Treblinka, the children of Auschwitz. They fought alone, they suffered alone, they lived alone, but they did not die alone, for something in all of us died with them.”