People sometimes think if they aren’t getting enough sleep they are an insomniac, and other people blame other things on their sleeplessness.  There are two characters in the short story “A Clean, Well-Lighted Place”, by Ernest Hemingway, one is a possible insomniac, protagonist, and one chooses to be an insomniac, antagonist.  These two characters each have something or someone to blame it upon, and each has a release or disguise for the problem.

The patron, or protagonist, who is in the story, is an elderly man who is rich, deaf and suicidal. This man is sitting in cafe where there are two 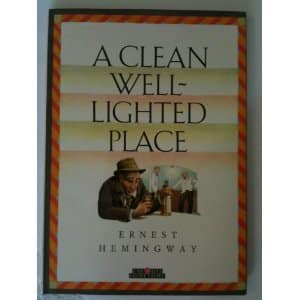 waiters sitting waiting for him to leave.  We learn about the old man through the waiters’ conversation, this is where we learn about the man’s suicide attempt.  The man tried to hang himself in house, and he would complete the feat if it wasn’t for his niece who cut him down.  This conversation is where we also learn about the man being deaf, and through this conversation we see how the younger waiter doesn’t see the person buried below the old man’s skin.   While the was old man sitting in the cafe drinking his brandy he looks up from his glass and sees a couple in the square. The couple in the square may symbolize the wife he lost, and this may give us an answer to, first, why did he want to kill himself, and second why is he sitting in a cafe alone late at night drinking.  Both of these answers are derived from non-literal material, so this makes the answers purely judgmental.

The younger waiter, or antagonist, is seen from the same perspective as the old man, which was bias to the favor of the old man.  The bias doesn’t make a large difference because the young waiter has a few destructive properties within his character. A few of these properties include his impatient behavior and ignorance to the mental state of this one patron.  All the waiter sees the old man as is a rich, drunk, fool, that is tying up his sleep time.  His impatient behavior is shown, again, through the conversation between him and the other waiter, in which he talks about not getting back home and in bed by three o’clock.  This behavior continues in the scene when he tells the old man that he should of died last week during his suicide attempt, while he fills his glass again with brandy.  His final step into the world of ignorance is when he tells the old man no more brandy, forcing him to leave, and in turn the waiter gets what he wants, to go home.

Both of these characters in this story have one thing in common, the inability to go to sleep when they want. The last thing that is said in the story is said by the older waiter, and he says, “He (the older waiter) would lie in the bed and finally, with daylight, he would go to sleep. After all, he said to himself, it is probably only insomnia. Many must have it.”