The Island of Dr. Moreau is a story that questions the ability of men playing God. The balance of nature is put to the ultimate test as a man by the name of Charles Edward Prendick stumbles across an out-of-control experiment that fuses man with animal.

At first glance, this tropical paradise seems idyllic. But deep in the jungles lays a terrifying secret. Moreau and Montgomery have been 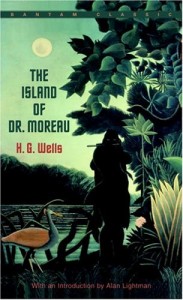 preforming scientific research on human beings and the experiment goes terribly wrong. They have ignored the most fundamental law of the jungle: survival of the fittest.

The first illustration is a drawing of Doctor Moreau explaining his status on the island to Prendick. Prendick has been finding out things that he shouldn¹t have known, and he demands answers. He gets his answers from Dr. Moreau but he hears things that are unimaginable. Moreau explains how he mutates humans into beast-like animals. For the rest of Prendick’s stay on the island he maintains an uneasy feeling and he wishes he never arrived on this island.

The Next sketch illustrates the beast’s new thirst for blood, which is a major turning point for the story. Roaming free, these beast-people are highly intelligent with murderous instincts. Their thirst for blood is pacified through a combination of sedatives and shock discipline. But events triggered by Prendick’s unexpected arrival are about to break Moreau¹s God- like domination over these resentful creatures.

The last drawing in my visual essay symbolizes a catastrophe. This was a point in the novel were all hell broke loose. Prendick found himself in the middle of a violent eruption between the doctor and his ³family.² Moreau, Montgomery, and most of the beasts lost their lives. Prendick himself was even forced to kill. It ended up that he was the last one left on the island except for a few beasts. Prendick later escaped the clutches of his captors and flees the island leaving behind terror, but taking a new life with him.

Further, the hero does not “take a new life with him” at the end, but returns to civilization to become a recluse, seeing people as little more than animals. The author of this piece misses the plot and theme. Moreau turns animals into mock humans.