“The Trip to Halawa Valley,” is a short story written by Lynne Sharon Schwartz.  The story is about a son succeeding and getting married in Hawaii, and the reunification of his divorced parents.  The parents become the main focus of the story when the son suggests that they go on a trip to Halawa Valley.

In this story Schwartz is trying to show people that once you make a decision it is very hard to turn back on that decision.  With all the 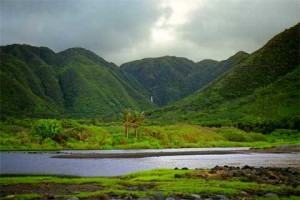 characters, except for the briefly mentioned newlyweds, Schwartz shows how decisions made by a person or a couple are hard to turn back on.  An example of this is Paul’s parents.  Lois and Jim are brought back together in Hawaii, and try to rekindle their love for each other.  After their trip though, they realize it cannot be done, and part in their own separate ways.

Schwartz does a very good job of showing the reader the experience she is trying to convey.  She does this by using a couple different characters throughout the story.  The main ones she uses are the parents, and that is the very obvious example.  A few other examples are not as clear, but they do show how decisions are an important factor in life and once made are very hard to turn around.  Using Paul’s brother Anthony, Schwartz shows that once he made the decision to join the Hare Krishnas there was no turning back, even if that meant not communicating with his parents anymore.  Schwartz also uses Paul’s other brother Eric.  When Eric announced that he was gay, his parents had to make the tough decision to either support or not support his choice in sexuality.

Schwartz develops the characters very fast, but in doing so makes the story move faster.  Throughout the story the characters are being developed through the thoughts of both Lois and Jim.  They talk about their kids and how one of them died at age 11 due to a brain tumor.  Schwartz also makes Lois develop Jim, and Jim develop Lois.  She does this by making them reminisce about their past together.

The conflict in this short story is between the parents of Paul.  They both do not know whether or not to get back together.  Throughout the story they both hint at getting back together, and once they even made love.  After they did though, Lois realized that she was wrong in making love to him and that they could never get back together.  Schwartz uses their unsuccessful attempts at reaching Halawa Valley as a comparison to the relationship.