Essay: Can you have thought without Language?

In order to be able to evaluate how we can have thought without language, it is necessary to define the terms. Thought is generally considered to be what goes on in our minds when we want to carry out an action. It’s quite a complex notion to comprehend but it simply is how we evaluate situations and what we go through in order to do something. Some could argue that emotions we have towards something or someone could be considered as thought.

Language mainly involves ‘words’. It also incorporates body language; using body movements to communicate. However, we’re going to be discussing about language with words in this essay. Language is what we humans use mainly to communicate and express ourselves. There is also sign which deaf people use to communicate. It could that this limits the amount of information as you can’t use voice tone to express any emotions, however facial expressions could be used to back up the sign language to show emotion.

You do get several instances where we have thought without language. It should be said the amount of thought you can have through language is limited to how much language you actually know. For example; As an English-speaking person, I would describe an action as ‘I am playing tennis’ which really means I’m playing tennis right at that moment. However, in the French language, that continuous tense doesn’t exist. The concept simply isn’t there. This implies that a French person would say the translation that means ‘I play tennis’ even if he’s playing tennis right at that moment. A French person that has been brought up in a French environment wouldn’t have the thought of expressing what they are doing in the continuous tense. Another situation that further emphases this point is when I feel something but I don’t have the words to describe. I feel something but since I don’t have an association between that emotion and a particular word, I’m unable to give it proper thought.

My next example to show we can have thought without language is a personal one and anyone can relate to this. I’m supposed to prepare for an 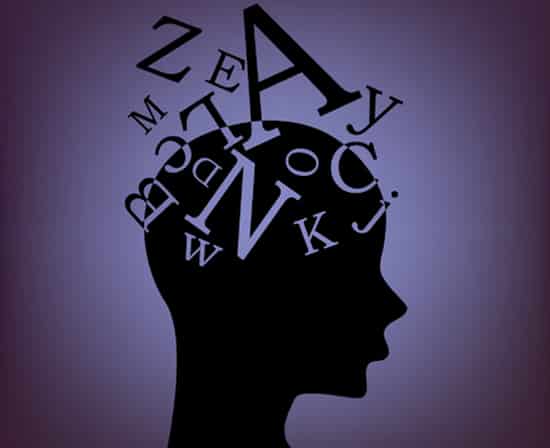 English presentation but I obviously cannot know exactly what words I’m going to say. While doing the presentation, I don’t think about everything I’m going to say as I have to be speaking continuously. I have to come up with what to say on the spot. There is some level of thought going on but it isn’t one that requires excessive use of language. During the presentation, I could pick a topic and my brain comes up with what I can say instinctively; my conscious mind doesn’t do the thinking hence I do not use language. This shows that when thinking instinctively, we don’t use language in our thoughts.

Furthermore, I was once asked by my brother to count the alphabet as some sort of competition to find out who talks the fastest between both of us. After counting ‘A,B,C…X,Y,Z’ as fast as I could, I thought to myself; I literally didn’t have to think about that before I said it. It was on the spot and instinctive; no sort of language went through my head. This shows that when having to do something on the spot, language isn’t used in thinking.

On the other hand, language is very useful in our everyday thinking. We can’t make a big decision like picking a university or deciding what to wear to an interview without language. We have this ‘little voice’ in our head that basically does the talking which is us thinking. For example, I’m sure my teacher can’t mark this essay without that ‘little voice’ in his head reading it out.

A major example of thought with language that I do pretty much every day is listening to someone talk. When someone says something, there is a thought process from interpreting what the word means which is instinctive and what the word implies when put into context which requires language. Even, when I’m listening to even music, I sort of talk to myself, thanks to that little voice again, and try to figure out when the message is.

Another major instance that requires a lot of language while thinking is interpreting from one language to another. I have personally helped in the translation from one language to another as I can understand a native African language called ‘Yoruba’. I had to translate from English to Yoruba for a couple of local residents in Nigeria and I wasn’t completely easy as I had to think about what word could portray the English word I was told in Yoruba. I succeeded but wasn’t very smooth like a professional. What I then found quite strange was that sometimes my Mum spoke this Yoruba to me and when I replied in English, it was very easy to translate in my head. I think this is because since I only had to understand what my Mum said in Yoruba, it was easy and replying in English was instinctive but converting from English to Yoruba meant I had to take the words and put it across in a Language that I wasn’t as comfortable with, hence requiring thought.

Cite this article as: William Anderson (Schoolworkhelper Editorial Team), "Essay: Can you have thought without Language?," in SchoolWorkHelper, 2021, https://schoolworkhelper.net/essay-can-you-have-thought-without-language/.

I spoke with a person with deafness about this. question. And he said that he was thankful that he didn’t learn sign language until he was 6. Because once you can name an object, you stop looking at it with wonder. This resonated with me, as once I saw a. bird I didn’t recognize. I examined him carefully every time he came into my yard–noticing every detail: size, wing details, exactly where each feather was. Once I identified with it, I would see it and name it and that was that. I am a huge fan of the movie Fantasia,… Read more »

It’s interesting to note that the author MUST use words, or language, to express every concept therein. In fact seemed to me to be grouping to find words to express themselves at times. Just because they claim that they were not conscious of the thought processes that occurred when “counting ‘A,B,C…X,Y,Z’ as fast as I could” is hardly proof of thought without words is it?