To uphold the law through the investigation of violations of federal criminal law; to protect the U.S. from foreign intelligence and terrorist activities; to provide leadership and law enforcement assistance to federal, state, local, and international agencies; and to perform these responsibilities in a manner that is responsive to the needs of the public and is faithful to the constitution of the U.S.: this is the mission of the Federal Bureau of Investigation. The agency now known as the Federal Bureau of Investigation was founded in 1908 when the Attorney General appointed an unnamed force of Special Agents to be the investigative force of the Department of Justice (DOJ). Before that time, the DOJ had to borrow Agents from the U.S. Secret Service to investigate violations of federal criminal laws within its jurisdiction. In 1909, the Special Agent Force was renamed the Bureau of Investigation, and after a series of name changes, it received its present official name in 1935. During the early period of the FBIs history, its agents investigated violations of mainly bankruptcy frauds, antitrust crime, and neutrality violation.

During World War One, the Bureau was given the responsibility of investigating espionage, sabotage, sedition (resistance against lawful 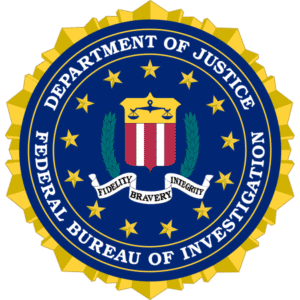 authority), and draft violations. The passage of the National Motor Vehicle Theft Act in 1919 further broadened the Bureau’s jurisdiction. After the passage of Prohibition in 1920, the gangster era began, bringing about a whole new type of crime. Criminals engaged in kidnapping and bank robbery, which were not federal crimes at that time. This changed in 1932 with the passage of a federal kidnapping statute. In 1934, many other federal criminal statutes were passed, and Congress gave Special Agents the authority to make arrests and to carry firearms. The FBIs size and jurisdiction during the Second World War increased greatly and included intelligence matters in South America. With the end of that war, and the arrival of the Atomic Age, the FBI began conducting background security investigations for the White House and other government agencies, as well as probes into internal security matters for the executive branch of the government. In the 1960s, civil rights and organized crime became major concerns of the FBI, and counterterrorism, drugs, financial crime, and violent crimes in the 1970s. These are still the major concerns of the FBI, only now it is to a greater extent.

With all of this responsibility, it is logical to say that the FBI is a field-oriented organization. They have nine divisions and four offices at FBI Headquarters in Washington, D.C. These divisions and offices provide direction and support services to 56 field offices and approximately 10,100 Special Agents and 13,700 other employees. Each FBI field office is overseen by a Special Agent in Charge, except for those located in New York City and Washington, D.C. Due to their large size; those offices are each managed by an Assistant Director in Charge. FBI field offices conduct their official business both directly from their headquarters and through approximately 400 satellite offices, known as resident agencies. The FBI also operates specialized field installations: two Regional Computer Support Centers; one in Pocatello, Idaho, and one in Fort Monmouth, New Jersey — and two Information technology Centers (ITCs); one at Butte, Montana, and one at Savannah, Georgia. The ITCs provide information services to support field investigative and administrative operations. Because they do have so much responsibility, their investigative authority is the broadest of all federal law enforcement agencies. The FBI also stresses long term, complex investigation; emphasize close relations and information sharing with other federal, state, local, and foreign law enforcement and intelligence agencies. A significant number of FBI investigations are conducted with other law enforcement agencies or as part of joint task forces. As part of this process, the FBI has divided its investigations into the following programs:

These programs cover most everything that the FBI investigates, and some individual cases in a program often receives extensive investigative attention because of their size, potential impact, or sensitivity.  Because FBI Special Agents are responsible for handling so many different things, they have to go through rigorous training in the following areas: Academics, Firearms, Physical Training/Defense Tactics, and Practical Exercises. Within these four major areas are components like interviewing techniques, communications, computer skills, and drug investigations. They receive all of this training at the FBI academy in Quantico, Virginia and must complete 645 hours (15 weeks) of instruction before they graduate.   The training in the academy is difficult, but those who have made it there have already passed the first test. To qualify for training as an FBI Agent, you must be:

3. Hold a bachelors degree obtained in an accredited four-year resident program at a college or university; and

4. Have three years full-time work experience, or fluency in a language for which the Bureau has a need for.

After graduation from the FBI Academy, a new Special Agent is assigned to an FBI field office. This assignment is determined by the individuals’ special skills and the needs of the bureau. As part of their duties, Special Agents are required to relocate during their careers. Special Agents enter service in Grade GS 10 on the federal governments General Schedule pay scale and can advance to Grade 13 in field assignment.  In our society today, one of the most important things to us is our safety. Organizations like the FBI help protect us and investigate crimes to help prevent future ones. Their motto is Fidelity, Bravery, and Integrity.

Can one be an fbi agent for the team in another state?