The natural law theory is a theory that dates back to the time of the Greeks and great thinkers like Plato and Aristotle. Defined as the law which states that human are inborn with certain laws preordained into them which let them determine what is right and what is wrong.(Bainton 174) This theory was them adapted by religious philosophers to fit the Christian religion.(Berkhof 114) This, however was not exactly the same as the original. The classical thinkers were the first to define the natural law.

Heraclitus, in the sixth century BC, specified one the components by saying, *for all human laws are nourished by one, the divine.* 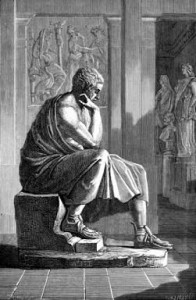 This meant that a divine power determined a logic and gave to all humans. (Microsoft Encarta) This definition put this law into direct conflict with positive laws. Aristotle elaborated on the word natural in relation to law. He said that a natural law was one that had the same validity for every one and situation.(Berkhof 268) An example of this would be that a man contemplating murder would see that it was wrong by his nature. His reason would tell him that to kill another was unnatural, and therefore wrong.

Cicero tries to determine what the actual law encompassed and he came up with the theory of Stoicism. Stoicism is an interpretation of the natural law which states that every, single person is a part of the universe that was created and is ruled by a divine power rationally. To live rationally and with virtue, according to the Stoics, was to follow one*s nature and reason. Thus, they deemed emotion and passion irrational, and therefore unnatural. For Stoics, the wise would be those who excluded emotion and passion from their decision making process.(Bainton 21-22) The great Christian philosophers came upon this theory and realized that it was compatible to their religion. Probably the most famous of them was St. Thomas Aquinas.

READ:
The Theory of Storage

He stated in his Summa Theologiae that God gave man the ability to determine the difference of right from wrong by the *Eternal Law.* This law gave all beings a tendency to do what was proper or natural. He went on to say that by doing what was right, each being was in fact using divine reason. The natural law, according to Aquinas, was the participation in the Eternal Law, doing what was right.(Comptons) Marriage and the procreation of children, for example, are natural to all beings. The desire to marry and make offspring is an inborn instinct given by God. The natural law, in both Christian and secular views, state that all humans act or should act in certain ways and abide by certain rules, and that these were predestined by a divine power. The Christian thinkers, led by St. Thomas Aquinas, only added that the divine power was God and that by doing what was right, one was using divine reason. The natural law is the essence of the word natural. It just means anything normal or feels normal is right.