The Fibonacci numbers were first discovered by a man named Leonardo Pisano. He was known by his nickname, Fibonacci. The Fibonacci sequence is a sequence in which each term is the sum of the 2 numbers preceding it. The first 10 Fibonacci numbers are: (1, 1, 2, 3, 5, 8, 13, 21, 34, 55, 89). These numbers are obviously recursive. Fibonacci was born around 1170 in Italy, and he died around 1240 in Italy. He played an important role in reviving ancient mathematics and made significant contributions of his own. Even though he was born in Italy he was educated in North Africa where his father held a diplomatic post. He did a lot of traveling with his father. He published a book called Liber abaci, in 1202, after his return to Italy.

This book was the first time the Fibonacci numbers had been discussed.  It was based on bits of Arithmetic and Algebra that Fibonacci had 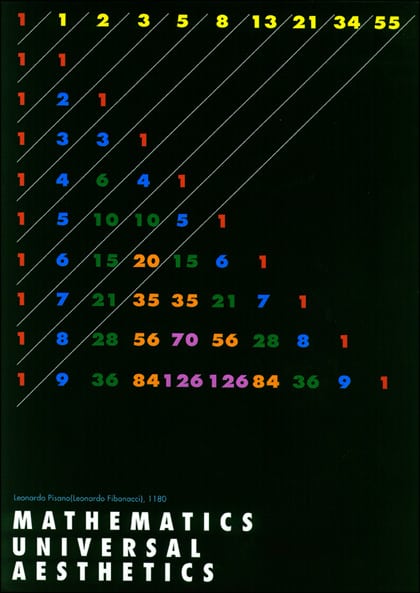 accumulated during his travels with his father. Liber abaci introduced the Hindu-Arabic place-valued decimal system and the use of Arabic numerals into Europe. This book, though, was somewhat contraversial because it contradicted and even proved some of the foremost Roman and Grecian Mathematicians of the time to be false. He published many famous mathematical books. Some of them were Practica geometriae in 1220 and Liber quadratorum in 1225.

The Fibonacci sequence is also used in the Pascal trianle. The sum of each diagnal row is a fibonacci number. They are also in the right sequence: 1,1,2,5,8………Fibonacci sequence has been a big factor in many patterns of things in nature. One has found that the fractions u/v representing the screw-like arrangement of leaves quite often are members of the fibonacci sequence. On many plants, the number of petals is a Fibonacci number: buttercups have 5 petals; lilies and iris have 3 petals; some delphiniums have 8; corn marigolds have 13 petals; some asters have 21 whereas daisies can be found with 34, 55 or even 89 petals. Fibonacci nmbers are also used with animals. The first problem Fibonacci had wehn using the Fibonacci numbers was trying to figure out was how fast rabbits could breed in ideal circumstances. Using the sequence he was ale to approximate the answer.

The Fibonacci numbers can also be found in many other patterns. The diagram below is what is known as the Fibonacci spiral. We can make another picture showing the Fibonacci numbers 1,1,2,3,5,8,13,21,.. if we start with two small squares of size 1, one on top of the other.  Now on the right of these draw a square of size 2 (=1+1). We can now draw a square on top of these, which has sides 3 units long, and another on the left of the picture which as side 5. We can continue adding squares around the picture, each new square having a side which is as long as the sum of the latest two squares drawn.