– any change in a gene that is accompanied by a loss or change in the functioning of the genetic information; many mutations are harmful
– spontaneous mutations have no known cause; improper crossing over, DNA replication
– induced mutations are caused by mutagens; radiation, chemicals, viruses 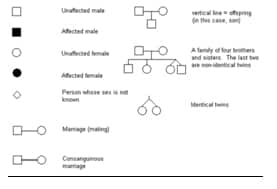 – are not passed on to future generations
– not harmful; unless involves a large number of cells, for example cancer

– having extra or missing whole chromosomes

A pedigree chart is useful in showing the patterns of transmission of a trait within a given family.

hello. I’m study in National University of Mongolia, in the Mongolia Ulaanbaatar. Biotechnology 3rd course. i have one problem my genetic engineering lesson.how to solve southern blot and northern blot, also how to built DNA primer? please help me. reply to my E-mail address. Tselmeg.boldsaikhan@yahoo.com