Georg Cantor founded set theory and introduced the concept of infinite numbers with his discovery of cardinal numbers. He also advanced the study of trigonometric series and was the first to prove the nondenumerability of the real numbers. 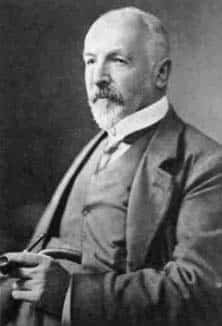 until the father’s sickly health forced them to move to the more acceptable environment of Frankfurt, Germany, the place where Georg would spend the rest of his life.

Georg excelled in mathematics. His father saw this gift and tried to push his son into the more profitable but less challenging field of engineering. Georg was not at all happy about this idea but he lacked the courage to stand up to his father and relented. However, after several years of training, he became so fed up with the idea that he mustered up the courage to beg his father to become a mathematician. Finally, just before entering college, his father let Georg study mathematics.

In 1862, Georg Cantor entered the University of Zurich only to transfer the next year to the University of Berlin after his father’s death. At Berlin he studied mathematics, philosophy and physics. There he studied under some of the greatest mathematicians of the day including Kronecker and Weierstrass. After receiving his doctorate in 1867 from Berlin, he was unable to find good employment and was forced to accept a position as an unpaid lecturer and later as an assistant professor at the University of Halle in1869. In 1874, he married and had six children.

It was in that same year of 1874 that Cantor published his first paper on the theory of sets. While studying a problem in analysis, he had dug deeply into its foundations, especially sets and infinite sets. What he found baffled him. In a series of papers from 1874 to 1897, he was able to prove that the set of integers had an equal number of members as the set of even numbers, squares, cubes, and roots to equations; that the number of points in a line segment is equal to the number of points in an infinite line, a plane and all mathematical space; and that the number of transcendental numbers, values such as pi(3.14159) and e(2.71828) that can never be the solution to any algebraic equation, were much larger than the number of integers.

Before in mathematics, infinity had been a sacred subject. Previously, Gauss had stated that infinity should only be used as a way of speaking and not as a mathematical value. Most mathematicians followed his advice and stayed away. However, Cantor would not leave it alone. He considered infinite sets not as merely going on forever but as completed entities, that is having an actual though infinite number of members. He called these actual infinite numbers transfinite numbers. By considering the infinite sets with a transfinite number of members, Cantor was able to come up his amazing discoveries. For his work, he was promoted to full professorship in 1879.

However, his new ideas also gained him numerous enemies. Many mathematicians just would not accept his groundbreaking ideas that shattered their safe world of mathematics. One of these critics was Leopold Kronecker. Kronecker was a firm believer that the only numbers were integers and that negatives, fractions, imaginaries and especially irrational numbers had no business in mathematics. He simply could not handle actual infinity. Using his prestige as a professor at the University of Berlin, he did all he could to suppress Cantor’s ideas and ruin his life. Among other things, he delayed or suppressed completely Cantor’s and his followers’ publications, belittled his ideas in front of his students and blocked Cantor’s life ambition of gaining a position at the prestigious University of Berlin.

Not all mathematicians were hostile to Cantor’s ideas. Some greats such as Karl Weierstrass, and long-time friend Richard Dedekind supported his ideas and attacked Kronecker’s actions. However, it was not enough. Cantor simply could not handle it. Stuck in a third-rate institution, stripped of well-deserved recognition for his work and under constant attack by Kronecker, he suffered the first of many nervous breakdowns in 1884.

In 1885 Cantor continued to extend his theory of cardinal numbers and of order types. He extended his theory of order types so that now his previously defined ordinal numbers became a special case. In 1895 and 1897 Cantor published his final double treatise on sets theory. Cantor proves that if A and B are sets with A equivalent to a subset of B and B equivalent to a subset of A then A and B are equivalent. This theorem was also proved by Felix Bernstein and by  Schröder.

The rest of his life was spent in and out of mental institutions and his work nearly ceased completely. Much too late for him to really enjoy it, his theory finally began to gain recognition by the turn of the century. In 1904, he was awarded a medal by the Royal Society of London and was made a member of both the London Mathematical Society and the Society of Sciences in Gottingen. He died in a mental institution on January 6, 1918.

Today, Cantor’s work is widely used in the many fields of mathematics. His theory on infinite sets reset the foundation of nearly every mathematical field and brought mathematics to its modern form.

Most everyone is familiar with the infinity symbol . How many is infinitely many? How far away is “from here to infinity”? How big is infinity?

We can’t count to infinity. Yet we are comfortable with the idea that there are infinitely many numbers to count with: no matter how big a number you might come up with, someone else can come up with a bigger one: that number plus one–or plus two, or times two. There simply is no biggest number.

At the turn of the century Cantor applied the tools of mathematical rigor and logical deduction to questions about infinity in search of satisfactory answers. His conclusions are paradoxical to our everyday experience, yet they are mathematically sound. The world of our everyday experience is finite. We can’t exactly say where the boundary line is, but beyond the finite, in the realm of the transfinite, things are different.

Cantor is the founder of the branch of mathematics called Set Theory, which is at the foundation of much of 20th century mathematics. At the heart of Set Theory is a hall of mirrors–the paradoxical infinity. Georg Cantor was known to have said, “I see it, but I do not believe it,” about one of his proofs.

In order to study infinite sets, Cantor first formalized many of the things that are intuitive and obvious about finite sets. At first, it seems like these formalizations are just a whole lot of trouble, a way of making simple things complicated. Because the formalisms are clearly correct, however, they provide a powerful tool for examining things that are not so simple, intuitive or obvious.

You can’t count the members in an infinite set, though, so this method won’t work for comparing their sizes. If there are two infinite sets, one must need some other way to tell if one is larger.

So, what is bigger?  infinity+X?  infinity+infinity ? Or  infinity(infinity)? To calculate which is bigger cantor used sets and one-to-one correspondence.

These one-to-one correspondence sets show that even though we add an unknown variable, multiply by two, and square a set, the upper and lower sets still remain equal. Since we will never run out of numbers any correspondence set with two infinite values will be equal. All these sets clearly have the same cardinality since its members can be put in a one-to-one correspondence with each other on and on forever. These sets are said to be countably infinite and their cardinality is denoted by the Hebrew letter aleph with a subscript nought, .

Cantor thought once you start dealing with infinities, everything is the same size. This did not turn out to be the case. Cantor developed an entire theory of transfinite arithmetic, the arithmetic of numbers beyond infinity. Although the sizes of the infinite sets of counting numbers, even numbers, odd numbers, square numbers, etc., are the same, there are other sets, the set of numbers that can be expressed as decimals, for instance, that are larger. Cantor’s work revealed that there are hierarchies of ever-larger infinities. The largest one is called the Continuum.

Although Kronecker did not persuade very many of his contemporaries to abandon all conclusions that relied on the existence of negative numbers, Cantor’s work was so revolutionary that Kronecker’s argument that it “went too far” seemed plausible. Kronecker was a member of the editorial boards of the important mathematical journals of his day, and he used his influence to prevent much of Cantor’s work from being published in his lifetime. Cantor did not know at the time of his death, that not only would his ideas prevail, but that they would shape the course of 20th century mathematics.