HELL NO, WE WON’T GO! American Public in the Vietnam War

Why was Vietnam a so heavily divided subject amongst the American People?

Vietnam was the first publically accessible war to the American public.  With the invention of the television and the constant media exposure, for the first time the horrors of war was a publically accessible domain.  Due to this, a ‘generation gap’ was created, creating two sides; those who had matured during WWII and those that had matured during Vietnam.  Generally, the older citizens were for Vietnam and the younger citizens were anti-Vietnam. Furthermore, the country became more anti-Vietnam after the casualty numbers started to roll in, Nixon started to lie, the draft was announced and TV was clearly showing that Vietnam “was invalid, badly executed, wasteful, vicious, and ugly” (Kim Herzinger) Vietnam is (to this date) one of the most publically opposed wars in history.  Vietnam spanned 5 Presidents; however, it only started to really heat up when Johnson took office and began to ‘crack down’ on ‘Nam.

The Draft; Conscription in the Vietnam War

Are you a young, relatively healthy American male? Don’t want to get shipped off to Vietnam?  You have a few options: 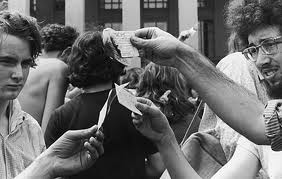 5) Burn your draft card proudly on the front lawn of General Hershey, the head of conscription

Responded by placing flowers in the mouths of their guns

Cite this article as: William Anderson (Schoolworkhelper Editorial Team), "HELL NO, WE WON’T GO! American Public in the Vietnam War," in SchoolWorkHelper, 2021, https://schoolworkhelper.net/hell-no-we-wont-go-american-public-in-the-vietnam-war/.