Herpes is a name that is used to describe several types of skin eruptions that are characterized by formation of blisters. The term embraces primarily two distinct disorders, herpes simplex and herpes zoster, both caused by viruses.  Together, these “herpes” viruses are estimated to cause more human illnesses than any other group of viruses.

Two types of herpes simplex are known. The first causes cold sores or fever blisters, which is  an eruption of blisters that often occurs during 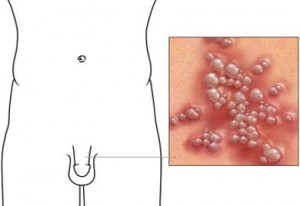 the course of or after one of a variety of diseases that eventually cause fever (most commonly average colds, the flu, and pneumonia). The blisters usually appear around the mouth and on the lips (herpes labialis), about the nose, face, and ears, and in the mouth and pharynx. The causative virus has been shown to be present in the cell bodies of the facial nerve in persons who do not have blisters. It is this reservoir of latent virus that is the source of repeated attacks. Except for lotions to relieve pain, itching, or inflammation, no established treatment has actually been developed.

The second type of the herpes simplex virus, however, is the usual cause of genital herpes. Herpes infections of the genital area have become increasingly “Herpes,” common, going along with a rise in general of many sexually transmitted diseases. Sometimes accompanied by headache and fever, the condition usually begins with a mild itching, followed by the development of clusters of blisters that break and crust to form scabs that eventually dry up. The process may last one to three weeks. In many cases new clusters of blisters appear as others heal. When a baby is born to a woman who has active genital herpes lesions, the infant is at high risk of contracting an infection that is often fatal, so these women usually have their babies delivered by a cesarian section. Primary cases of genital herpes can be treated by a drug called acyclovir, which was approved in 1982 and in another form, which is to be taken orally rather than used in an ointment form, in 1984.  It also has been proving useful against recurrent attacks.

The virus can also invade the central nervous system, or CNS, especially in people who are weakened by other diseases, such as cancer, causing a severe case of encephalitis. Early treatment of herpetic encephalitis with the drug acyclovir can prevent death and brain damage in many cases.

How can herpes be prevented?  Because the disease is transmitted most often through bodily fluids, the simplest protection is to simply protect yourself.  During “Herpes,” sex, one of the partners should definitely be wearing a condom, and that alone will greatly cut down an individual’s chances of acquiring the virus of herpes-simplex type-2.

The Body Is the Hero.