Honduras is a tiny nation in Central America, known for its violent history and consistent political instability. 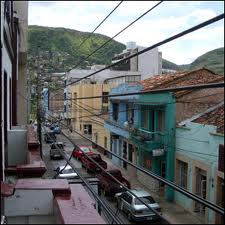 Honduras borders many nations, including Guatemala, Nicaragua, and El Salvador. Along with land borders, Honduras is also bordered by the Pacific Ocean, the Gulf of Fonseca and the Gulf of Honduras. Honduras is small in physical stature compared to many nations, with a size of only 112,000 km² (The World Factbook). Honduras currently ranks 93rd in the world in terms of population with 7,792,854 inhabitants (The World Factbook). Many of these inhabitants live in the largest city and capital called Tegucigalpa. Tegucigalpa, the cultural and financial center of Honduras, has been under constant duress through the political and economic turmoil which has plagued the nation.

The area which became Honduras was mainly occupied by indigenous people upon the arrival of the Spanish in the 16th Century. The first European to discover Honduras was Christopher Columbus in 1502, when he landed near what would become the modern day city of Trujillo. Upon arrival, Columbus decided to name the area Honduras, which is the Spanish term for depths. The word Honduras was meant to describe the extremely deep waters off the coast. In 1524, Cristobal de Olid established the first colony in Honduras, just east of Puerto Caballas. Olid claimed himself as governor of the colony. As the Spanish were beginning to colonize Honduras, they began to be met by resistance from the indigenous peoples. Finally, in 1536, the Spanish completely quelled indigenous resistance and took control of the country.

The Spanish reign lasted for nearly 300 years, until, on September 15, 1821, Honduras, along with several other Central American nations, officially declared independence from Spain (Background Note: Honduras). After this, Honduras joined a new group called the United Provinces of Central America. Unfortunately, this union was unsuccessful and collapsed only a short while later in 1838. From 1838 until the end of World War II, the main objective for Honduras was to try to restore the union of Central American nations.

Honduras first became heavily involved in the international scene with the “Banana Wars”, which was an ongoing feud with the United States starting at the beginning of the 20th century. The US had several farming companies, including Standard Fruit, Cuyamel Fruit Company and the United Fruit Company, working in Honduras to harvest bananas. If American interests were ever threatened in Honduras, they did not hesitate to send in troops and police to quell any rebellion.

In 1955, a strike occurred among the banana workers, which eventually became a pretext for a junta which led to reform, including the abolishment of capital punishment and the beginning of constituent elections in 1957. In 1957, the Liberal Party of Honduras took power for a six year term, led by Ramon Villeda. Unfortunately, Villeda was murdered in 1963 as part of a nasty and bloody coup d’état.

A coup d’état is defined as “a sudden and decisive action in politics, especially one resulting in a change of government illegally or by force”(Coup D’état). Coups plagued Honduras for the next 25 years as different leaders came to power through a vicious cycle of continuous bloody uprisings. Tension during this time was also increased due to a war occurring with El Salvador, known as the Football War. This was as a result of Honduras’ perceived mistreatment of the large number of immigrants from El Salvador (Mallin). Many were kicked off of their land in order for it to be given to people who were born in Honduras.

Finally, in 1979, Honduras began to find political stability and, in 1985, the first peaceful transfer of political power occurred  in thirty years. Eventually, two parties, the Liberal Party of Honduras and the National Party of Honduras, rose to prominence. In October, 2005, the PLH defeated the PNH in the federal election, leading to the reign of Manuel Zelaya. Zelaya ordered there to be a poll of public opinion to see if the nation had interest in making significant changes to the constitution. This request for a poll made Zelaya go from relatively popular as president to extremely unpopular. His approval rating sank below 25% in October, 2008(“President Zelaya Drops to 25% in Honduras.”). Zelaya lost the confidence of the nation and the Supreme Court deemed his public opinion poll to be unconstitutional and illegal.

In June, 2009, another coup d’etat occurred, in which the Supreme Court ordered that soldiers seize Zelaya and take him to an air force base. From the air force base, he was put into exile and sent to Costa Rica, which was a neutral country. Upon Zelaya’s removal, Roberto Micheletti assumed the presidency of Honduras. The Supreme Court claimed this was legitimate as it had received a letter of resignation from Zelaya. However, Zelaya claimed that the coup was violent, as he was kidnapped from his bed at gunpoint and forced into exile.

After this incident, most of the world strongly condemned the actions of the Supreme Court for placing Zelaya in exile. In the United Nations, all 192 nation members signed a one page resolution, condemning the coup and calling for the return of Zelaya as president. Barrack Obama, on behalf of the United States, said, “We believe that the coup was not legal and that President Zelaya remains the President of Honduras”( Mohammed and Alexander). Countries that typically did not get along with each other were mainly in agreement over this issue. Venezuela, one of the major enemies of the US, was in full agreement with the illegitimacy of the coup. Venezuela stated that, if their embassies at any point were attacked during this coup that they would have no hesitation in invading Honduras. He stated “that military junta would be entering a de facto state of war. We would have to act militarily … I have put the armed forces of Venezuela on alert” (Barillas).

During this incident, Canada has taken a back seat to the problems of Honduras. Canada never fully declared an opinion on the matter and basically maintained neutrality. Canada is the second largest investor in Honduras and the one most likely to take a stand, which could have hurt their business ventures there. Canadian foreign policy stated that, as long as negotiations remained on track, they would prefer not to be involved. However, as negotiations continued to falter, Canada did not step up and staunchly proclaim support for Zelaya as other nations had. Many in the Canadian government feel that some of the issues Zelaya had been brought upon by himself, and somewhat justify the coup. All in all, Canada has not taken the most desirable or active approach to this issue.

In the past few weeks, the situation in Honduras has changed to quite an extent. On September 21, 2009, Zelaya arrived back in the capital city of Tegucigalpa at the Brazilian embassy. Originally, de facto president Micheletti denied that Zelaya had returned. Eventually, Zelaya’s return was acknowledged by Micheletti but Micheletti stated that there was no significance to the return. Micheletti then issued a curfew in the city and put checkpoints all over the highways leading to Tegucigalpa, in order to stop rebels and trouble makers. At the same time as Micheletti’s actions, there was a lot of unrest beginning to develop among the citizens of Honduras. A 60,000 member teachers’ union went on strike shortly after Zelaya’s return in order to protest his removal as leader (Aleman). Meanwhile, as Zelaya was holed up at the Brazillian embassy, Micheletti gave the embassy ten days to decide what to do with him. If the deadline was not met, the Honduras government said it would have to act. The Brazilian embassy refused to acknowledge the deadline, saying it would not listen to a group of “coup mongers”. After the deadline was ignored, the Honduras government and its soldiers surrounded the embassy, leading to the current situation.

Currently, Honduras sits at a crossroad in its future. There has, historically, been much political turmoil over the years, and now is no different. Although leaders have been elected democratically in the recent past, the nation still faces much political instability. Many countries do not support the present situation in Honduras and this poses a real threat to the economic well-being of the nation. Over the coming weeks, the future of Honduras rests in the hands of these leaders, who, at the moment, are having a tough time agreeing on anything. The nation has a choice from here as to whether or not it would like to begin to develop political stability, or sink into deeper political turmoil. Recent events support the latter as being the likely conclusion. Ghandi would describe the situation in Honduras best by saying “Unity, to be real, must stand the severest strain without breaking”.