Huntington’s disease, or Huntngton’s chorea, is a genetic disease that causes selective neural cell death, which results in chorea, or irregular, jerking movements of the limbs caused by involuntary muscle contractions, and dementia.  It can cause a lack of concentration and depression.  It also may cause atrophy of the caudate nucleus, a part of the brain.  However, symptoms vary between individuals, with some sufferers showing symptoms that others do not.  Those suffering from Huntington’s disease normally begin displaying symptoms between the ages of 30 and 50, but has been known to show itself in people as young as two and as old as 80.

Huntington’s disease is inehrited from one of the victim’s parents.  Since the gene for HD is dominant, there is a 50% chance of a sufferer’s

offspring inheriting the disease.  Because a victim usually does not begin to display symptoms until after the period in which he or she would have children and the disease may have been misdiagnosed in earlier generations as Parkinson’s disease or other similar affliction, he or she might pass along the gene without even knowing it.

Treatment of Huntington’s disease usually involves counciling and education about the disease of both the family and the patient.  Since the symptoms are so varied in both type and severeness from patient to patient, medical treatment must be individualized.

Depression, a common symptom, is usually treated with tricyclic antidepressants.  Those that also show obsessive compulsive behavior may take some types of serotonergic agents.

Neuroleptics, or drugs that block dopamine receptors, are useful in the treatment of chorea. 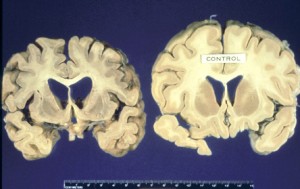 It has been suggested that treatment with nerve-growth producing agents may be an affective treatment, but research is still being conducted.  Procedures such as pallidotomy, or removing part of the globus pallidus, and thalamotomy, or cutting part of the thalamus have both showed promising results in the treatment of the involuntary movements and tremors in Parkinson’s disease and may also help sufferers of Huntington’s.  Fetal brain tissue transplantation has also helped in Parkinson’s disease patients.  While there has been a few of these transplantations performed on HD patients, it is still too early to evaluate its success.

Since the huntington protien causes a gain of function instead of a loss of function, normal gene therapy tecniques normally do not work.  Instead, the protien must be removed or its gain of function effects must be inhibited.  Currently, the second approach makes more sense, since we already know how the huntington protein interacts with other proteins and we can, through this knowledge, find modulators to treat the disease.

In conclusion, Huntington’s disease is a degenerative disease of the mind and body.  It ultimately causes death.  While current treatments can only help the symptoms, it is hoped that further research and new tecniques will bring about an effective cure.

Caring for People With Huntington’s Disease