Hurricanes get their start over the warm tropical waters of the North Atlantic Ocean near the equator. Most hurricanes appear in late summer or early fall, when sea temperatures are at their highest. The warm waters heats the air above it, and the updrafts of warm, moist air begin to rise.  Day after day the fluffy cumuli form atop the updrafts.

But the cloud tops rarely rise higher than about 6,000 feet.  At that height in the tropics, there is usually a layer of warm, dry air that acts like

an invisible ceiling or lid.  Once in a while, something happens in the upper air that destroys this lid. Scientist don not know how this happens. But when it does, it’s the first step in the birth of a hurricane.  With the lid off, the warm, moist air rises higher and higher.

Heat energy, released as the water vapor in the air condenses. As it condenses it drives the upper drafts to heights of 50,000 to 60,000 feet. The cumuli become towering thunderheads.  From outside the storm area, air moves in over the sea surface to replace the air soaring upwards in the thunderheads. The air begins swirling around the storm center, for the same reason that the air swirls around a tornado center.  As this air swirls in over the sea surface, it soaks up more and more water vapour. At the storm center, this new supply of water vapor gets pulled into the thunderhead updrafts, releasing still more energy as the water vapor condenses. This makes the updrafts raise faster, pulling in even larger amounts of air and water vapor from the storm’s edges. And as the updrafts speed up, air swirls faster and faster around the storm center. The storm clouds, moving with the swirling air, form a coil. In a few days the hurricane will have grown greatly in size and power. The swirling shape of the winds of the hurricane is shaped like a dough-nut. At the center of this giant “dough-nut” is a cloudless, hole usually having a radius of 10 miles.

Through it, the blue waters of the ocean can be seen. The hurricane’s wind speed near the center of the hurricane ranges from 75 miles to 150 miles per hour.  The winds of 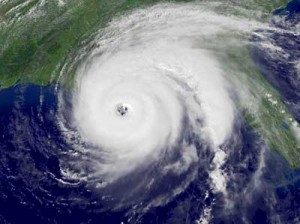 a forming hurricane tend to pull away from the center as the wind speed increases. When the winds move fast enough, the “hole” develops.  This hole is the mark of a full-fledge hurricane. The hole in the center of the hurricane is called the “eye” of the hurricane. Within the eye, all is calm and peaceful. But in the cloud wall surrounding the eye, things are very different.  Although hurricane winds do not blow as fast as tornado winds, a hurricane is far more destructive. That’s because tornado winds cover only a small area, usually less than a mile across. A hurricane’s winds may cover an area 60 miles wide out from the center of the eye. Another reason is tornadoes rarely last as long as an hour, or travel more than 100 miles. However, a hurricane may rage for a week or more (example: Hurricane Dorthy) in that time, it may travel tens of thousands of miles over the sea and land.

At sea, hurricane winds whip up giant waves up to 20 feet high. Such waves can tear freighters and other oceangoing ships in half. Over land, hurricane winds can uproot trees, blow down telephone lines and power lines, and tear chimneys off rooftops. The air is filled with deadly flying fragments of brick, wood, and glass.