The Encarta Encyclopedia defines hypnosis as, “altered state of consciousness and heightened responsiveness to suggestion; it may 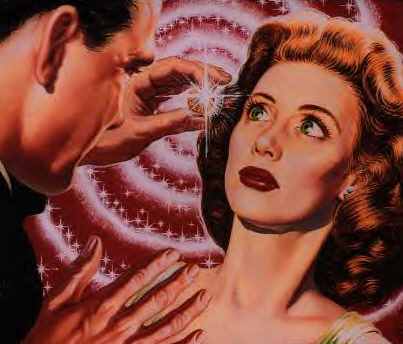 be induced by normal persons by a variety of methods and has been used occasionally in medical and psychiatric treatment. Most frequently brought about through actions of an operator, or “hypnotist”, who engages the attention of a subject and assigns certain tasks to him or her while uttering monotonous, repetitive verbal commands; such tasks may include muscle relaxation, eye fixation, and arm levitation. Hypnosis also may be self-induced, by trained relaxation, concentration on one’s own breathing, or by a variety of monotonous practices and rituals that are found in many mystical, philosophical, and religious systems.

“Another generally reliable source Webster’s New Universal Unabridged Dictionary defines it as, “a sleep like condition psychically induced, usually by another person, in which the subject loses consciousness but responds, with certain limitations, to the suggest ions of the hypnotist.” As I stated earlier, these two sources are very reputed and the general population believes that they are correct.

Although evidence suggests that hypnosis has been practiced in some form or another for several thousand years, such as in coal walking, the earliest recorded history of hypnosis begins in 1734. It begins with a man named Franz Anton Mesmer. Although he was eventually disavowed by the scientific community because of his unorthodox methods that made him seems more of a mysticist that a scientist, he is generally known as the father of hypnotism. Mesmer called his methods Mesmerism, thus the word mesmerizes, but the name didn’t stick, it later changed to hypnosis, its name being derived from Hypnos, the Greek god of sleep. He believed that hypnosis was reached by using a person’s “animal magnetism”. He used “mesmerism” to cure illness.

In 1795 an English physician named James Braid, who was originally opposed to Mesmer’s methods became interested. He believed that cures were not due to animal magnetism however, but the power of suggestion. This was the generally accepted opinion of the scientific community.

Then in 1825 Jean Marie Charcot, a French neurologist, disagreed with “The Nancy School of Hypnotism”, which followed the guidelines of James Braid’s ideas. Charcot believed that hypnosis was simply a “manifestation of hysteria”. He revived Mesmer’s theory of animal magnetism and identified the three stages of the trance; lethargy, catalepsy, and somnambulism.

Ivan Petrovich Pavlov (1849-1936) was not a scientist who worked with hypnosis. Although he had nothing to do with the hypnotic development itself, his Stimulus Response Theory is a cornerstone linking and anchoring behaviors, particularly NLP (Neuro-Linguistic Programming).

Emily Coue (1857-1926) a physician formulated the Laws of Suggestion which are greatly used in the hypnotic community. Her first

law is The Law of Concentrated Attention: “Whenever attention is concentrated on an idea over and over again, it spontaneously tends to realize itself”. The second law is- The Law of Reverse Action: “The harder one tries to do something, the less chance one has of success.” Finally, the last law is The Law of Dominant Effect: “A stronger emotion tends to replace a weaker one.

“Milton Erickson (1932-1974), a psychologist and psychiatrist pioneered the art of indirect suggestion in hypnosis. He is considered the father of modern hypnosis. His methods bypassed the conscious mind through the use of both verbal and nonverbal pacing techniques including metaphor, confusion, and many others. He was definitely a major influence in contemporary hypnotherapy’s acceptance by the American Medical Association.

READ:
What is Dementia? Definition & History

There are many misconceptions about hypnosis that are totally without basis. Such as, “Hypnotized persons will tell secrets or will always tell the truth.” The truth is, hypnosis will not cause a person to tell information they do not want to tell and a person under hypnosis can purposefully lie or remember in a distorted fashion. Another myth about hypnotism is, “Hypnosis won’t work on highly intelligent people.” In reality innate characteristics such as intelligence do not at all affect hypnotism. Any person however can resist being hypnotized either actively or passively, if they desire. I believe that hypnotism would be a more commonly used method in medicine if it were not for all the myths going around about hypnotism. They are probably the result of the very limited knowledge of exactly how hypnosis works.

Hypnosis has been used to treat a variety of physiological and behavioral problems. It can alleviate back pain and pain that comes from burns or cancer. It is controversial as to whether this actually works or not, but it is believed that it can be used to insure normal and safe childbirth. Hypnosis sometimes is employed to treat physical problems with a psychological component, such as a circulatory disease known as Raynaud’s Syndrome. It has also been used to initiate behavioral changes, for example cigarette smoking, overeating, insomnia, and the overcoming of phobias. Although hypnotism has shown its uses as a fairly valuable medical tool, in this modern “technological age” there are very few physicians who use it.