In the story “The Scarlet Ibis” by James Hurst a young handicapped by is born with a large head, a small body, and a weak heart.  As time goes on, Doodle overcomes many obstacles with the help of his older brother.

Doodle, the handicapped boy, is mentally developed slower and is challenged to learn how to walk with the help of his brother, six years olde 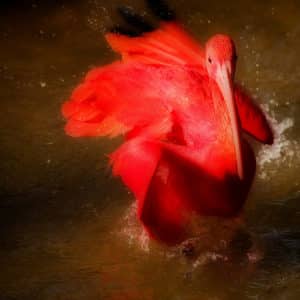 r than he is.  Doodle’s brother didn’t want to take Doodle everywhere in a go-kart, so the both of them were determined to make Doodle walk by his birthday, and he does.

Throughout the entire story Doodle and his brother are faced with challenges that people believe he won’t be able to accomplish, but they show them wrong.

As Doodle grows older, his brother makes sure that he doesn’t fall behind the other kids and tries to keep Doodle ahead of, or at least at the same level as the other children.  Doodle learns to walk, run, play, and even row a boat: all of the things the doctor said he wouldn’t be able to do because of his heart.

The story ends tragically by Doodle, scared by the thunderstorm, trying to catch up to his brother who is running faster than he is yelling out “Don’t leave me brother, don’t leave me!”  When his brother realizes that he stopped running, he turns around and finds Doodle under a tree with blood in his mouth. His heart gave out from running too hard, and his brother held him as he died.