In this novel, the title describes the underlying theme to the book. Pride and prejudice were both influences on the characters and their relationships. Darcy alienated himself from the others at first because of his intense pride. His prejudice against the Bennet’s because of their poverty was also something that he would have to overcome.

For Elizabeth, her prejudice against Darcy came from his snobbery. It caused her to not see his feelings for her and to believe 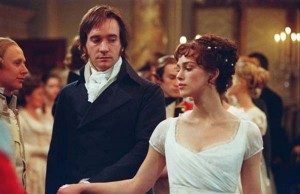 whatever Wickman said. Darcy’s fierce pride often alienated him from others. For example, he acted so snobby and superior at the first ball with the Bennet’s that they were all turned off by him. His eventual love, Elizabeth, was disgusted at his behavior and formed a prejudice against him. Even after he fell in love with her and proposed to Elizabeth, he completely debased her family. Darcy realized eventually that he was going to have to change. He tried to look at his behavior and analyze why he acted as he did. In the end, he fought his intense pride so that he and Elizabeth could be happy together.

Prejudice was also an issue for Darcy in that he disliked Elizabeth in the beginning because of her low social status, poverty, and socially inept family. Darcy was forced to deal with his prejudice when he fell in love with Elizabeth. This was not easy for him to do but it was necessary. His snobbery was countered by his love for Elizabeth. In the end, he overcame his pride and gave in to his feelings by marrying her in spite of her and her family’s shortcomings.

Elizabeth had her own issues with prejudice with which to deal. Darcy’s cold arrogance and snobbery prejudiced her from him from the beginning and it took Elizabeth a lot longer time to overcome her prejudices than it did Darcy. This was because Elizabeth was a very caring person and did not like the things that Darcy had said about her and her family. When given the chance, Elizabeth loved to hear about how awful Darcy was, such as when she met Wickman, who was eager to slander Darcy. However, Elizabeth gradually came around and began to fall in love with Darcy, but it was difficult for her to overcome the prejudices that had been imposed on her by both herself and Darcy.

This novel’s theme was tied up in the title of the book, Pride and Prejudice. The pride that Darcy felt and his initial prejudice against all of the Bennet family was eventually overwhelmed by his love for Elizabeth. For Elizabeth, she needed to overcome her prejudices about Darcy and see through his snobbery. In the end, all the pride and prejudice was dealt with and Darcy and Elizabeth were left in love.