“If this country is preserved in tranquility twenty years longer, it may bid defiance in a just cause to any power whatever; such in that time will be its popularity, wealth and resources,” stated by George Washington in response to demonstrators over the Jay Treaty. 1 Washington’s remark was regarding the public’s uproar following the release of information on the status of the discord with Great Britain.

The people had just been informed of the contents of the Jay Treaty which were: 1) Britain agreed to give up the fur posts in American 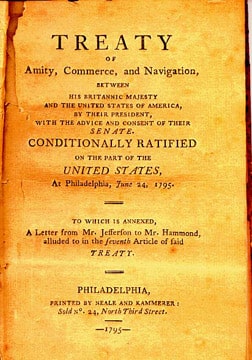 territory, 2) Britain also agreed to submit to arbitration the questions of disputed boundaries, the damage done to American shipping, and the debts due to British merchants. Although the people did not like these terms, Washington supported them to prevent us from going to war. Washington made his first move by sending a delegate to England, and furthermore by standing up to congress to get this treaty ratified. He demonstrates again his great moral courage for the welfare of his country.

Although Washington himself did not write the treaty he deserves all the credit for initiating it in the first place. The times had become rough with the British, and according to Hamilton the British were a vital part of our economy. He said ” …the tax on imports furnished much of the money for paying off our foreign, domestic, and state debts.” 2 Along with the British’s impressments of American seamen and their role in our economy Washington knew something had to be done. Washington knew that the tension between America and England had to be thinned out so he decided to send over a special envoy. The individual chosen for the job was Chief Justice of the Supreme Court, John Jay. John Jay had much experience in this department because he was the former Secretary for Foreign Affairs under the old Confederation. His objective was to make peace between the two countries. He was under instructions to make no commitment in violation of the treaties with France. Fortunately, Washington came to terms to do this, otherwise our infant country may never have grown into what it is today. This indubitably turned out to be one of Washington’s bolder moves towards assisting his country.

Another powerful move was demonstrated by Washington as he persuaded the Senate to ratify the treaty. The Jay Treaty was signed on November 19th , 1794, but was not ratified by the Senate until seven months later. “President George Washington’s signing of the Jay Treaty provoked unimaginable criticism of his character and policies and changed the focus of the debate over the treaty.” 3 Some of the Americans wanted to go to war, so essentially George Washington was putting his name on the line to get this treaty ratified. The Republicans in the House attempted to block the treaty by denying the appropriation for enforcing its provisions. The House request for the papers relating to Jay’s Treaty was refused by Washington because the concurrence of the two Houses was not required to give validity to a treaty and “because of the necessity of maintaining the boundaries fixed by the Constitution.” 4 Again, the people are lucky to have a persistent leader who deserves credit for saving our country.

The prominent individual who deserves all the credit in nurturing our country from its young and early days is unquestionably George Washington. The passage of the Jay Treaty was instrumental in allowing the young country to develop economically and ultimately prevent war with Britain. The second influential move he made was to have this treaty ratified. He argued that the country did not need to draw itself into a war with a country that held ninety percent of its imports. Washington had to fight for this with his reputation and even his life. These were the visions of George Washington. As the years went by because of George Washington, the United States and Great Britain were able to settle their differences peacefully. In doing so they followed the precedent of arbitration established in Jay’s Treaty and they demonstrated to the world one way of avoiding wars. 5