Knute Kenneth Rockne was born on March 4, 1888 in Voss, Norway. He first moved to Chicago at the age of 5. Nobody liked him there, and he was in many fights. Before football or even baseball, Knute discovered skiing.  He loved it, and went skiing every chance he got during the winter. Knute was a natural athlete, and excelled in all of the sports he tried. He excelled in track, making a name for himself later on.

Although he was always one of the shortest guys around, Knute was one of the toughest. The only protective gear he ever wore was adhesive 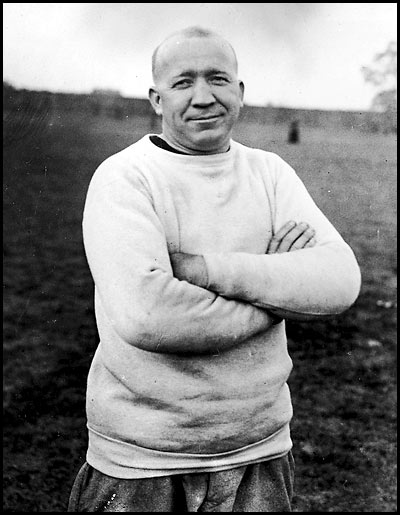 tape that he stuck to his ears to prevent them from being torn off. Knute often said “Show me a good and gracious loser and I’ll show you a failure.”

Knute discovered the great game of football at the age of 7. He played in games against other teams his age. The team he played on was called the Tricky Tigers. All of the teams were “sandlot” teams. Knute could not get enough of the sport. He praticed every chance he got. In fact, the other boys thought him crazy for practicing so much. This obsession almost got him an education. Knute never made the starting team until he was a senior, so he played on the scrubs team.

At the same time, Knute tried playing many other sports. His school attendance slipped and his grades became mediocre. Persistence paid off, and after 3 years on the scrubs, Knute finally made it to the starting football team. After this successful senior football season, it was time for him to leave high school. It was a wonder that he got into Notre Dame with his high school record.

At the age of 22, Rockne decided that he wanted to fulfill a dream. That dream was to become a pharmacist and to eventually own his own drug store. Two of Knute’s friends gained acceptance to a small college in South Bend, Indiana called Notre Dame.  Knute decided to try to get into this same school, although his high school grades were dismal. He was accepted, but his parents were not fond of the idea of him going to a Catholic school, as they themselves were practicing Lutherans. However, they did not forbid him to go. Interestingly, Notre Dame was not Rockney’s first college choice. For years he had saved and planned to go to the University of Illinois. Knute had not even planned on playing football in college. That decision would have resulted in a very different future for Knute. Basically, Knute’s decision to go to Notre Dame was an economic one; it was much cheaper than U.I.

While working during college to earn his way, Knute got a course in memory training, which would later become a valuable asset in his coaching career. A picture at this time revealed a cocky young man whose sparse hair made him appear more like a young professor than a college freshman. Knute made friends with the future quarter back Gus Dorais. They would be roommates through all 4 years of college, and took vacations together during school breaks.

Rockne didn’t make the varsity squad until his third year. There were many theories about why this was. Some said he was too short and caused too many turnovers as a freshman. Whatever the reason, Knute palyed on the scrubs for two years. A new coach entered the picture by his junior year and gave Knute a chance at the end position. Everyone knows what he did from there. (If you don’t already, you will!) In his career at Notre Dame, Knute averaged a 92 grade point average. In his senior year of college, he was still determined to become a pharmacist. He had no intention of becoming a coach!

Rockne did not invent the forward pass – he revolutionized it! During a summer break from school, Gus and Knute decided to fool around with The forward pass. Knute got an idea telling Gus “What if you hold the football closer to this end?” Gus tried it and was astonished by the outcome. He could actually control the speed and accuracy of the ball! After that, Gus discovered something he wanted Knute to do. Instead of letting the ball come to him and hit him in the chest, he instructed Knute to catch it with his hands in full stride. Gus then proceeded to deliver the ball to Knute in this fashion, and the idea worked. Sure enough, Knute caught the ball without missing a step. Knute Rockne had perfected the art of relaxing your hands to catch the ball. He also invented pass patterns. Notre Dame brought this new arsenal to their playbook in the biggest game of the year against Army. Army was heavily favored in this game. The “fighting Irish” came out with their usual ground attack for 7 plays, with Rockne out with a leg injury. Rockne came out to the huddle and told Gus it was time. Rockne went in, hitting the OB and ran a beautiful pattern. Gus delivered the ball right on target and Rockne scored on a 25 yard toss. Everyone was awed by this sequence of events. Notre Dame went into halftime leading 14-13. They came out in the 2nd half and boom, boom, one pass after another they marched down the field like a steam roller. Seven completions went to Knute. The Irish trounced Army with a 35-13 victory, in what would become known as the game that revolutionized football. In his autobiography, Rockne said that this victory inspired the development of Notre Dame spirit.

After the game, Gus and Knute held clinics to teach the forward pass, and many came to learn a spectacular art form. Football was no longer a sport of physical being, but more of a science which anyone could master. After the victory against Army, Knute decided to stay at N.D. and become a teacher. This was because he loved all the people so much. He would not stay long though, for he still grasps on dream of becoming a pharmacist. In Rockne’s deal he would be teaching chemistry and take the job of assistant coach of the football team. His salary was $2,400 per year.

From the first practice Rockne displayed a skill as a strategist. He found many new ways to run plays and confuse the opposition. When Harper(the head coach) retired, Rockne took the prestigious job of head coach of ND. His salary was increased to $5,000 a year. It was at this time that he loosened his grip on becoming a pharmacist and decided to devote his life to football.

From day one Rockne’s goal was to establish ND as a national sports power. Rockne once said about coaching, “We can all be geniuses, because one definition of genius is the infinite capacity for taking pains. Perfection in petty detail is most essential”.

George Gipp was a freshman thinking of dropping out of school. Rockne found him drop-kicking 52 yard field goals on the campus’s practice 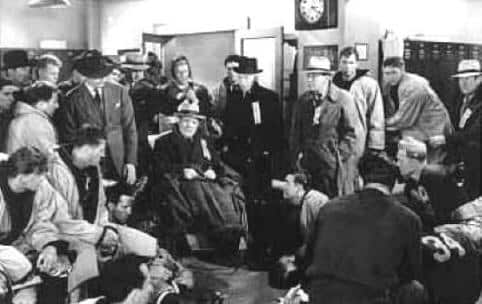 grounds. Knute invited him to try out for the team. In his first season the Gipper’ kicked a 62 yard field goal, scored three game clinching touchdowns, and had a total of 480 yards in one game versus Army. He was considered to be the best player that Rockne had ever recruited. Gipp was a notorious fellow for gambling and cutting class. Still, the team and Knute immortalized him. Gipp died of complications from pneumonia during the 1920 season. In his final game, although very ill, he remarkably threw two touchdowns versus NW.

“Eight years later, as the Irish battled a seemingly invincible Army team, Rockne shook his team with quiet locker room speech that was immortalized by sport writer Grantland Rice.”I’ve got to go, Rock,” said Rockne, Imitating the dying man’s gestures. “It’s alright. I’m not afraid. Sometimes, Rock, when things are wrong and the breaks are beating the boys, tell them to go in there with all they’ve got and win one just for the Gipper. I don’t know where I’ll be then, Rock, but I’ll know about it. And I’ll be happy.”

The Irish ran out of the room and played hardnosed football. The final score was 12-6 in Notre Dame’s favor, and the New York daily News ran perhaps its most famous headline: Gipp’s Ghost Beat Army.”

One of his most innovative ideas was the Notre Dame Shift’. This was when the entire backfield would move all to one side of the ball before the ball was snapped. This really screwed up the defenders and it worked a lot for ND.

The Cleveland Press called him “the Buffalo Bill of his generation.” In his last game as coach he defied his doctor’s orders and went to the field. The players looked on in horror when the man they thought might die in front of them told them to win or watch him dying. Rockne ended his career with the greatest all time % of .881: 105 wins,12 losses, 5 ties, 6 national championships and 5 undefeated seasons. Rokne tragically died in a plane crash at the age of 43. Studebaker named a car after him and the U.S. government named a ship after him. Will Rogers put it best when he said, “It takes a big calamity to shock a country all at once, but Knute, you did it. You died one of our national heroes. Notre Dame was your address, but every gridiron in America was your home.”(