Lunar craters are basically circular hollows on the surface of the moon. They are formed because of the impact of the meteoroids 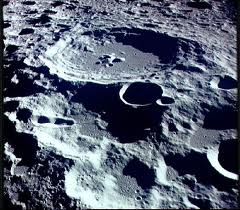 strikes. The smallest craters are microscopic pits, but the largest, the Aitken Basin, is nearly 21000 kilometres wide. Just an interesting fact, one of the most interesting craters on the moon is Copernicus. It has a diameter of approximately 56 miles. The crater’s massive walls reach heights of 17,000 feet which is twice as high as the Grand Canyon. (Kathy Miles and Chuck Peters, StarSkies Systems, 2008); http://starryskies.com/The_sky/events/lunar-2003/eclipse6.html)

The rim of a crater is the part that extends above the height of the local surface, usually in a circular or elliptical pattern. Most crater floors are dotted with many small craters and include peaks that reflect light just like the lunar highlands. Many lunar craters are named after people from around the world including scientists, inventors, explorers, mathematicians and astronauts.Many craters are fringed with bright streaks called rays. Some of these rays appear to be hundreds of kilometres long. For a long time, their origin was unknown. Evidence from research suggests that rays consist of shattered rock & dust that were splashed out by the meteoroids that formed the craters.

Lunar soil is not really soil. Scientists have another name for it, regolith. Regolith means loose rock materials. It is a greyish brown mixture of small rock pieced and fine particles that range in size from sane grains to fine dust. Regolith is different from Earth soil; it contains no water or organic material. Regolith is formed by the smashing impact of meteoroid of all sizes. Rock fragments are mixed over broad areas when large meteoroids explode. This stirring of the regolith is known as gardening.