Salinity in both the rivers and on the land is one of the main and most costly results of over clearing and irrigation. Salinity is caused by changes in the delicate balance between surface water and groundwater systems. A small increase in the infiltration of water from the topsoil to the groundwater, due to rainfall or irrigation, can result in a dramatic rise in groundwater pressure and water table levels. 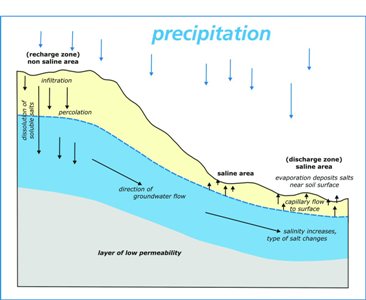 The trees of the open forests are now replaced by shallow-rooted crops and pastures which absorb far less water than the native trees. Those trees had been massive water pumps, sucking up moisture from deep underground and putting it back into the atmosphere through the evaporation from their leaves. With those pumps gone, excess rainfall accumulates underground and water tables rise to the surface, bringing ancient sediments of salt with them, often in heavy concentrations.

Once exposed to the air and sun, the salts become even more concentrated due to evaporation, leaving a white crust of salt crystals on the land. Most plants cannot tolerate the scalding chemical effect of the salt, and so they die. As they die off, the soil succumbs to erosion and a double dose of salt and sediment enters nearby rivers and wetlands. In cattle-grazing areas, the animals often gather at saline seeps to lick the salt, which leads to further erosion.

Salinity affects around 560,000 hectares of the Murray-Darling basin’s most productive irrigation lands, mostly in southern New South Wales, and northern Victoria, and partly in South Australia. This represents more than half the total irrigation area. In Western Australia, about 250 square kilometers of agricultural land is going out of production every year because of soil salinity caused by over clearing of native vegetation.