Electric Current (the movement of electrons) in a wire can produce a force at a distance (a field) on metals made of any combination of Iron, Nickel, and Cobalt.  This is an electromagnet.

All neutral atoms have electrons moving in orbits.  Some atoms (Iron, Nickel, and Cobalt) have an electron arrangement that act like tiny magnets.  Small clumps of these atoms act like small magnets called domains.

A piece of ferromagnetic metal (Fe, Ni, or Co) with randomly pointed domains is NOT a strong magnet overall.

If the domains are lined up to point in the same direction, like millions of tiny magnets, then a strong magnet is produced.

Magnets consist of dipoles (2 poles at the same time): North & South.  There are no known monopoles.  (North or South only)

Some large objects (like planets and stars) have magnetic poles due to circulating molten or plasma cores.  The Earth has a magnetic field from a circulating iron core.

If the north end of a compass is attracted toward the “north” end of our planet, is the “north” really a north pole of a magnet?

Our north pole is really a south magnetic pole.  It is called a north pole because the north end of a compass point there. 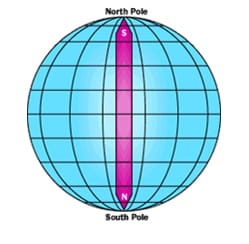 Magnetic fields are represented by the symbol 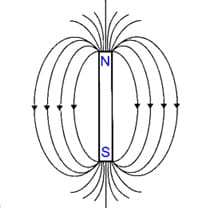 Whenever electrons move through a conductor, a magnetic field is created in the region around the conductor.

Oersted’s principle: charges moving through a conductor produce a circular magnetic field around the conductor.

The direction of the magnetic field lines around a current carrying conductor is given by the left hand rule. 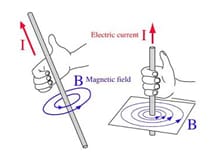 Left Hand Rules (for eLectron flow, negative to positive)
For a straight conductor:
For a coiled conductor:
Note: The Right Hand Rule is used for conventional flow (positive to negative)

To differentiate field lines going into and out of the page, Xs and dots are used: