Morley Callaghan “They Shall Inherit the Earth”: Summary & Analysis

Michael Aikenhead had always been an impulsive individual, even while he was just a boy, and because of this, Michael had lost his innocence. 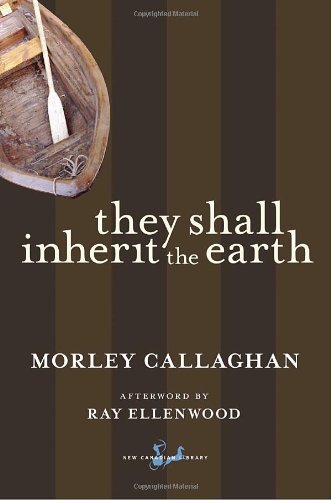 However, Michael Aikenhead not only lost his innocence through the eyes of others, but had also lost his innocence through his own eyes. While staying at a cottage that his father owned up in the country, it can be argued that Michael had murdered Dave Choate. Michael had taken Dave Choate out on a boat to try to convince Dave to leave Sheila alone. Dave refused to listen to Michael and asked Michael repeatedly to turn the boat around, but Michael simply said “I won’t turn back till we settle this” . Dave Choate finally decided that since Michael would not row him back home, he would just swim home, and so Dave “dived off the end of the boat” . Michael was not about to give up and so he began to row after Dave. When he got to Dave, he did not help him onto the boat but instead “tried to hook him with the oar” and tire him but he did not succeed and soon, Dave was headed to the other shore. A few days later, Dave’s body was found and Dave’s mother, Martha Choate, blamed Michael’s father, Andrew Aikenhead for murdering Dave because of an argument they had a few nights ago.

Soon, rumors were being spread all around about Michael’s father, Andrew Aikenhead, murdering Dave. Therefore, Michael had not only lost his innocence by being the cause of Dave’s death, but he had also ruined Andrew Aikenhead’s life by not confessing what he had done. Furthermore, Michael was not only guilty of hiding the truth, but “it did not seem unjust to Michael that he should be free and his father should be bearing the blame for Dave Choate’s death.”  It was not until Michael married Anna Prychoda and was waiting for his son to be born that he realized everything he had done was wrong. As he looked out the window of the hospital, Michael had a feeling that he would receive his nemesis as he was sure “she would die that night and die apart from him” , he was sure that Anna would die. Michael Aikenhead had lost his innocence time and time again because of his impulsiveness and lack of thought towards other people and important situations.

Dave Choate had lost his innocence because of his drinking problem and because of his selfishness. Dave’s drinking problem had caused him to do many foolish things. Dave was not a bad man “for when he was sober he was friendly and quiet, and the drinking escapades the silly parties and the cheap and willing girls”. Therefore, every time Dave gets drunk, he loses his innocence. Dave was also very selfish and because he was a selfish man he has experienced the loss of innocence through the eyes of other.

When Dave said to Sheila “if you marry Ross Hillquist, I just can’t go on” and “Ross Hillquist won’t want to marry you if he knows your mother was out of her mind before she died” , he was selfish because he wanted to be loved by Sheila, but by telling her these things, Sheila felt uncomfortable and so Dave had lost his innocence by making Sheila feel this way. When Michael Aikenhead found out about Dave telling Sheila these things, Dave had also lost his innocence through the eyes of Michael as well for Michael was a good brother and really cared about Sheila. Although Dave Choate was very selfish, his selfishness did not just happen suddenly, ever since Dave had been a boy, he was a selfish person. When he and his mother had first moved in with the Aikenhead family, Dave was already very selfish and demanding as he said things like “you’ve got to let me come. My mother said you had to.”  By saying these things, it caused Michael to not only hate Dave, but it caused him to hate Martha Choate even more then he did already. Dave’s death can also be seen as a loss of innocence because Dave did not just die, when Dave had passed away, he lost everything that he had or would have had, he lost such things as his future, his friends, his family as well as his innocence. Dave Choate was obviously very selfish and clearly had a drinking problem and because of this, Dave had lost his innocence.

READ:
Nancy Farmer’s The Ear, The Eye, and the Arm: Summary & Analysis

When an article was written in the papers about Dave Choate’s death, almost everybody who knew Andrew had also prejudged him and accused him of the murder. When he was in the country, just shortly after Dave’s death had been discovered, “the smile left his face, he flushed” when he met up with his old acquaintances and “no one called out to him in the old way”. Because of these accusations towards Andrew, he had lost just about all of his innocence. As Andrew Aikenhead’s life was deteriorating, he lost yet another friend, Stewart Roebuck, by telling Roebuck his honest opinion about Roebuck’s paintings. Because Andrew had expressed his true thoughts, “Roebuck had grown cold and had lost all confidence in him”,causing Andrew to lose all confidence in himself. Although his greatest loss of innocence would be his blame for murdering Dave Choate, Andrew Aikenhead had also lost his innocence greatly when he had married Martha Choate. Andrew lost his innocence through the eyes of Michael Aikenhead by marrying Martha Choate because of Michael’s intense feeling of anger towards both Dave and Martha Choate. After Andrew had married Martha Choate, Michael demonstrated his objection to the marriage by running away from home with Sheila, but as that did not work out, Michael moved out the first chance he had and had not talked to his father for years. Andrew Aikenhead tries hard to accomplish what he believes in and in doing so, does nothing to threaten society, yet it is Andrew Aikenhead who suffers more than anyone else due to the loss of his innocence.

1. Callaghan, Morley. They Shall Inherit the Earth. Ontario: McClelland and Stewart Limited, 1984