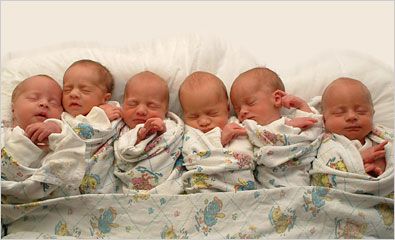 different combinations of ways but the probability of giving birth to more than one child remains fairly constant when compared to the entire human race. The chances of multiple births can also vary from race and genetic background. Scientist and researchers do not know what the exact cause of these variations is but many of them feel that it is caused by hormone differences between different racial groups and/or the difference in social class. The prenatal and infant mortality is much higher in multiple pregnancies than in pregnancies that only involves one child. The danger of premature birth also increased with the higher number of offspring that are involved. In many multiple births, not all of the children survived to childhood or were born dead. Through the advances in technology, the survival rate of infants born in a multiple pregnancy has increased. The first quintuplets, five babies born in a single pregnancy, to survive in medical history were the Dionne quintuplets. The use of drugs that treat female sterility, or fertility drugs, may increase the chances of giving birth to multiple children. These drugs cause the ovaries to release an egg once a month but in some cases they release more than one egg, sometimes releasing several at a time, increasing the chances of a multiple birth. The drug clomiphene citrate is one of the most widely taken fertility drug and has resulted in the birth of twins about once in every twelve births, much greater than the chances of the birth of natural twins. Twins are the most common form of a multiple pregnancy. About one in eighty-seven births result in the birth of twins. Twins can be fraternal, also known as dizygotic twins, or identical, also called monozygotic twins, with the birth of identical twins being the rarest, occurring about four times in every thousand births, about one-forth as often as the birth of fraternal twins.

This ratio of the birth of twins to the total number of births remains fairly constant but the birth of fraternal twins can alter greatly. Fraternal twins are most common among black African followed by people of European origin. Asian races originating from the orient are the least likely to give birth to fraternal twins. The birth of twins can occur in two different ways, the fertilization of a single egg or the fertilization of two eggs. In the case of dizygotic twins, the woman’s ovaries release two eggs about the same time instead of one, with each being fertilized by the male’s sperm, fraternal twins begin to develop. The two zygotes develop differently, each having a different genetic coding. They can be both boys, both girls, or a single boy and a single girl. Because each embryo develops on its own from different genetic characteristics, dizygotic twins resemble family characteristics as do brother and sister. The birth of monozygotic twins takes place much differently than do the births of fraternal twins. Identical twins originate from a single egg, fertilized similarly to that of a single pregnancy. A change transpires early in the pregnancy that causes the development of identical twins. The change from a single birth to the birth of monozygotic twins occurs when the zygote ruptures into two separate structures. These two parts begin to develop into individual fetuses, sharing a similar genetic code and developing in a similar manner. Identical twins are of the same sex, resemble each other very closely, and have similar fingerprints and blood types. Scientists also believe that Siamese twins, also known as conjoined twins, develop in a similar fashion as do monozygotic twins. Siamese twins are identical twins with the difference that the zygote did not divide completely during their development. Such twins are usually joined at the hip, chest, abdomen, buttocks, or head. With current monitoring equipment, conjoined twins can be detected maturing in the mother and during birth a Cesarean section is sometimes needed to deliver the children safely. Separation of the twins sometimes leads to the death of one or both of the twins.

These births are a rare event, occurring only about one in every fifty-thousand births. Other forms of multiple births such as triplets, quadruplets and quintuplets, occur very similarly to the birth of twins. Births of triplets are rarer than the birth of twins, occurring approximately once in every seven-thousand nine-hundred births. The birth of triplets can occur in a combination of ways. If the zygote divides into three separate structures in the early stages of development, identical twins will be born. If two cells are fertilized and one divides into two structures as in monozygotic twins, the birth of a pair of identical twins will be born along with a single infant. If the ovaries release three eggs, which are then fertilized, then the birth of fraternal triplets will occur. The same level of combinations can be observed in the development of quadruplets, quintuplets, and the very rare occasion of a pregnancy of six children. The birth of quadruplets only takes place once in every seven-hundred and five thousand births and quintuplets are born once in every eight million births. The birth of six infants is so rare that accurate statistics cannot be made while compared to the total amount of births around the world. In all of these forms of multiple pregnancies, the process is very similar. If the woman’s ovaries release four or five eggs then the birth of quadruplets or quintuplets will arise. If the cell divides into four of five structures will then cause the pregnancy of identical quadruplets or quintuplets. These and numerous other combinations can occur as the number of infants involved increases.     Multiple pregnancies are a rare occasion, one of the factors for the incomplete statistics of the birth of a six child pregnancy. The number of infants born in multiple births, as well as larger births consisting of six or more children, are also increasing due to the use of fertility drugs. This widespread use is forcing researchers not to accept any multiple births that were endorsed by drugs as part of the general statistics. Some aspects of multiple births are still not clear to scientist. The difference between the probabilities of multiple pregnancies of women of different races is just one of these problems. More about multiple births has been learned over the ages but more is still to be learned and tested by scientists.