Nicholas Ferrar was assumed to be born in 1592. I have found that his most probable birth date was in February of 1593. This is due to the usual calendar confusion: England was not at that time using the new calendar adopted in October 1582. It was 1593 according to our modern calendar, but at the time the new year in England began on the following March 25th. Nicholas Ferrar was one of the more interesting figures in English history.

His family was quite wealthy and were heavily involved in the Virginia Company, which had a Royal Charter for the plantation of Virginia. 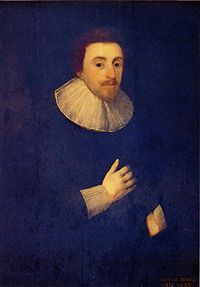 People like Sir Walter Raleigh were often visitors to the family home in London. Ferrars niece was named Virginia, the first known use of this name. Ferrar studied at Cambridge and would have gone further with his studies but the damp air of the fens was bad for his health and he traveled to Europe, spending time in the warmer climate of Italy. On his return to England he found his family had fared badly.

His brother John had become over extended financially and the Virginia Company was in danger of losing its charter. Nicholas dedicated himself to saving the family fortune and was successful. He served for a short time as Member of Parliament, where he tried to promote the cause for the Virginia Company. His efforts were in vain for the company lost their charter anyway. Nicholas is given credit for founding a Christian community called the English Protestant Nunnery at Little Gidding in Huntingdonshire, England. After Ferrar was ordained as a deacon, he retired and started his little community. Ferrar was given help and support with his semi-religious community by John Collet, as well as Collet s wife and fourteen children. They devoted themselves to a life of prayer, fasting and almsgiving (Matthew 6:2,5,16).  The community was founded in 1626, when Nicholas was 34 years old.

Banning together, they restored an abandoned church that was being used as a barn. Being of wealthy decent, Ferrar purchased the manor of Little Gidding, a village which had been discarded since the Black Death (a major outbreak of the bubonic plague in the 14th century), a few miles off the Great North Road, and probably recommended by John Williams, Bishop of Lincoln whose palace was in the nearby village of Buckden. About thirty people along with Mary Ferrar (Ferrars mother) moved into the manor house. Nicholas became spiritual leader of the community. The community was very strict under the supervision of Nicholas. They read daily offices of the Book of Common Prayer, including the recital of the complete Psalter. Every day. Day and night there was at least one member of the community kneeling in prayer at the altar, that they were keeping the word, Pray without ceasing. They taught the neighborhood children, and looked after the health and well being of the community.

They fasted and in many ways embraced voluntary poverty so that they might have as much money as possible for the relief of the poor. They wrote books and stories dealing with various aspects of Christian faith and practice. The memory of the community survived to inspire and influence later undertakings of Christian communal living, and one of T.S. Eliot’s Four Quartets is called Little Gidding. Nicholas was a bookbinder and he taught the community the craft as well as gilding and the so-called pasting printing by means of a rolling press. The members of the community produced the remarkable Harmonies of the scriptures, one of which was produced by Mary Collet for King Charles I.. Some of the bindings were in gold toothed leather, some were in velvet which had a considerable amount of gold tooling. Some of the embroidered bindings of this period have also been attributed to the so-called nuns of Little Gidding. The community attracted much attention and was visited by the king, Charles I.

He was attracted by a gospel harmony they had produced. The king asked to borrow it only to return it a few months later in exchange for a promise of a new harmony to give his son, Charles, Prince of Wales. This the Ferrars did, and the superbly produced and bound manuscript passed through the royal collection, and is now on display at the British Library. Nicholas Ferrar, who was never married, died in 1637, and was buried outside the church in Little Gidding. Nicholass brother John assumed the leadership of the community. John did his best to make the community thrive. He was visited by the king several times. At one time the king came for a visit with the Prince of Wales, he donated some money that he had won in a card game from the prince. The king’s last visit was in secret and at night. He was fleeing from defeat from the battle of Naseby and was heading north to try to enlist support from the Scots. John brought him secretly to Little Gidding and got him away the next day. The community was now in much danger.

READ:
I Corinthians: Seventh book of the New Testament

The Presbyterian Puritans were now on the rise and the community was condemned with a series of pamphlets calling them an Arminian Nunnery (Ariminius was a Dutch reformer and theologian who opposed the Calvinist doctrine of predestination and election) In 1646 the community was forcibly broken up by Parliamentary soldiers. Their brass baptismal font was damaged, cast into the pond and not recovered until 200 years later. The village remained in the Ferrar family but it was not until the 18th century that the church was restored by another Nicholas Ferrar. Ferrar restored the church, shortened the nave by about 8 feet and built the dull facade that Eliot spoke of. In the mid 19th century, William Hodgkinson came along and restored the church more. He installed the armorial stain glass windows, (4 windows with the arms of Ferrar, Charles the 1st and Bishop Williams inserted). He then put in a rose window at the east end (this rose window was later replaced by a Palladian-style plain glass window). Hodgkinson recovered the brass font, restored it and reinstalled it in the church.