Few people recognize his name today, and even among those who do, the words Nikola Tesla are likely to summon up the image of a crackpot rather than an authentic scientist. Nikola Tesla was possibly the greatest inventor the world has ever known. He was, without doubt, a genius who is not only credited with many devices we use today, but is also credited with astonishing, sometimes world-transforming, devices that are even simply amazing by today’s scientific standards. Tesla was born at precisely midnight between July 9th and 10th, 1856, in Smiljan, Croatia. He was born to his father, a priest, and his mother, an unschooled but extremely intelligent women. Training for an engineering career, he attended the Technical University of Graz, Austria and was shortly employed in a government telegraph engineering office in Budapest, where he made his first invention, a telephone repeater.

Tesla sailed to America in 1884, arriving in New York City with four cents in his pocket, and many great ideas in his head. He first found

employment with a young Thomas Edison in New Jersey, but the two inventors, were far apart in background and methods. But, because of their differences, Tesla soon left the employment of Edison, and in May 1885, George Westinghouse, head of the Westinghouse Electric Company in Pittsburgh, bought the patent rights to many of Tesla’s inventions. After a difficult period, during which Tesla invented but lost his rights to many inventions, he established his own laboratory in New York City in 1887, where his inventive mind could be free. In 1895, Tesla discovered X-rays after hours upon hours of experimentation. Tesla’s countless experiments included work on different power sources and various types of lightning. The Tesla coil, which he invented in 1891, is widely used today in radio and television sets and other electronic equipment for wireless communication. That year also marked the date of Tesla’s United States citizenship. Brilliant and eccentric, Tesla was then at the peak of his inventive powers.

He managed to produce new forms of generators, transformers, he invented the fluorescent light, and he became extremely involved with the wireless transmission of power. During the 1880a and 1890’s Tesla and Edison became rivals, fighting to develop their inventions as quickly as possible. In 1915 he was severely disappointed when a report that he and Edison were to share the Nobel Prize. Edison went back on a promise to pay him a sum of money for a particular inventions and Tesla broke off relations at once and went into the inventing business for himself. The biggest rivaling against Edison was Tesla’s development of alternating current which was very conflicting to Edison’s use of electricity, direct current. This great power struggle between Tesla and Edison’s use of electricity practically ended when Tesla’s alternating current won out and was most favored and ruled most practical. Tesla’s alternating current was used to light the Chicago’s World Fair. His success was a factor in winning him the contract to install the first power machinery at Niagara Falls, which bore Tesla’s name and patent numbers. The project carried power to Buffalo by 1896. In 1898 Tesla announced his invention of a teleautomatic boat guided by remote control. When skepticism was voiced, Tesla proved his claims for it before a crowd in Madison Square Garden.

The biggest controversy in Tesla’s career is what most popularizes his name today, this controversy is the fact that Tesla made hundreds of inventions and discoveries that was simply amazing. Many people have called tesla “a man out of his time” because his astonishing experiments. In Colorado Springs, where he stayed from May 1899 until early 1900, Tesla made what he regarded as his most important discovery, terrestrial stationary waves. By this discovery he proved that the earth could be used as a conductor and would be as responsive as a tuning fork to electrical vibrations of a certain pitch. He also lighted 200 lamps without wires from a distance of 25 miles and created man-made lightning, producing flashes measuring 135 feet. He was fond of creating neighborhood-threatening electrical storms in his apartment laboratory and once nearly knocked down a tall building by attaching a mysterious “black box” to its side. He claimed he could have destroyed the entire planet with a similar device. Caustic criticism greeted his speculations concerning communication with other planets, his assertions that he could split the earth like an apple, and his claim to having invented a death ray capable of destroying 10,000 airplanes, 250 miles distant. Because of a lack of funds, his ideas remained in his notebooks, which are still examined by engineers for unexplored clues. Many of these were eventually inherited by Tesla’s nephew, and later housed in the Nikola Tesla Museum in Belgrade, Yugoslavia. 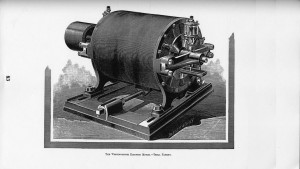 However, a major portion of his notes were impounded by the US Government, and very few of those have surfaced today. And because he kept so few notes, to this day we can only guess at the details of many of the fantastic scientific projects that he occupied. Many questions have raised concerning his confiscated notes, although, the government regards some as never existed and declared others as “lost”. Was he working on particle weapons and cloaking devices for the United States Government when he died? Was Reagan’s Strategic Defense program known as “starwars” the result of secret research based on Tesla’s discoveries half a century before? Nikola Tesla allowed himself only a few close friends.

Among them were the writers Robert Underwood Johnson, Mark Twain, and Francis Marion Crawford. In his later years, Tesla was alone with only his inventions and calculations, although he did bred pigeons later in life, who he gave all the affection to that he was unable to give human beings. Telsa’s name holds over 700 patents. Tesla died privately and peacefully at 87 on January 7, 1943 New York hotel room from no apparent cause in particular. Hundreds filed into New York City’s Cathedral of St.John for his funeral services, and a flood of messages acknowledged the loss of a great genius. Three Nobel Prize winners in physics (Millikan, Compton, and W.H. Barton) addressed their tributes. One of the outstanding intellects of the world who paved the way for many of the technological developments of modern times, Nikola Tesla.

You are both correct and Tesla’s birthplace has been corrected to Smiljan, Croatia

Tesla was not Autro-Hungarian citizen, he was born in Smiljan, at the time Kingdom of Hungary.

The division was so marked between the countries that there was no common citizenship: a person was either an Austrian or a Hungarian citizen, and no one was allowed to hold dual citizenships.[4][5][clarification needed] The difference in citizenship also meant that, there were always separate Austrian and Hungarian passports, never a common one.[6][7]

It is a shame how he was swept under the rug by the elite liers that profited off his ideas.Till this very moment.

I am writing you from Belgrade Serbia. Nikola Tesla was born in a small village of Smiljan in Croatia. He was born to Serbian parents and he left all his property to Serbian people. His museum Nikola Tesla is opened in 1953 here in Belgrade and has a great collection of his personal effects, papers, and all his work. His ashes are also in this museum. Just for those who ever come to Belgrade and are interested in Tesla.
Thank you
Lilly