On the Duty of Civil Disobedience (1849): Henry David Thoreau

Thoreau (1817-1862) was an American naturalist and writer.  This work of his has become the basis of non-violent protest throughout history and the world.  Thoreau believed that nonviolence or passive disobedience was necessary whenever government edict conflicted with higher moral law- the ideal natural law, from which human law was derived.

I heartily accept the motto, “That government is best which governs least”; and I should like to see it acted up to more rapidly and 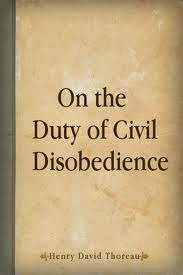 systematically. Carried out, it finally amounts to this, which also I believe — “That government is best which governs not at all”; and when men are prepared for it, that will be the kind of government which the will have….

Can there not be a government in which the majorities do not virtually decide right and wrong, but conscience? — in which majorities decide only those questions to which the rule of expediency is applicable? Must the citizen ever for a moment, or in the least degree, resign his conscience to the legislator? Why has every man a conscience then? I think that we should be men first, and subjects afterward. It is not desirable to cultivate a respect for the law, so much as for the right. The only obligation which I have a right to assume is to do at any time what I think right. It is truly enough said that a corporation has no conscience; but a corporation on conscientious men is a corporation with a conscience…..

Action from principle, the perception and the performance of right, changes things and relations; it is essentially revolutionary, and does not consist wholly with anything which was. It not only divided States and churches, it divides families; ay, it divides the individual, separating the diabolical in him from the divine…..

Unjust laws exist: shall we be content to obey them, or shall we endeavor to amend them, and obey them until we have succeeded, or shall we transgress them at once?….

Under a government which imprisons unjustly, the true place for a just man is also a prison….

Thus the state never intentionally confronts a man’s sense, intellectual or moral, but only his body, his senses. It is not armed with superior with or honesty, but with superior physical strength. I was not born to be forced. I will breathe after my own fashion. Let us see who is the strongest. What force has a multitude? They only can force me who obey a higher law than I.

They force me to become like themselves. I do not hear of men being forced to live this way or that by masses of men. What sort of life were that to live? When I meet a government which says to me, “Your money our your life,” why should I be in haste to give it my money? It may be in a great strait, and not know what to do: I cannot help that. It must help itself; do as I do. It is not worth the while to snivel about it. I am not responsible for the successful working of the machinery of society. I am not the son of the engineer. I perceive that, when an acorn and a chestnut fall side by side, the one does not remain inert to make way for the other, but both obey their own laws, and spring and grow and flourish as best they can, till one, perchance, overshadows and destroys the other. If a plant cannot live according to nature, it dies; and so a man.