Rosa Parks is an extraordinary person because she stood up against racism and stood up for herself. It was even harder for her because she is a woman, and in those days, things were much harder for woman.

Rosa Parks hated the ways of her life. She had always dreamed of having freedom in her life. As she grew up, she went through 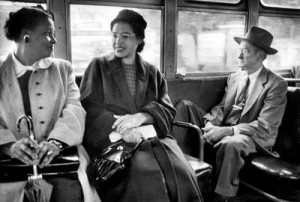 different experiences that gave her courage and strength. One day, Rosa Parks had so much courage and strength that when her bus arrived to pick her up, she got on the bus, put her money in the slot, and sat in the front of the bus. Black people were supposed to sit in the back. The bus driver told her to move to the back, but she just sat there and refused to move. The driver called the police and they arrested Rosa Parks.

The next day, Raymond Parks went to pick up Rosa from jail. When they got home, Rosa spoke about her time in jail. She had stood up to get a drink of water and the guard told her the drinking fountain was only for white people. This made her furious. On December 5, 1955 Rosa Parks, Martin Luther King, Jr. and JoAnn Robinson looked out of their windows, and stood on street corners watching all of the yellow buses drive by. There were hardly any black riders since Rosa Park’s arrest. It was a miracle. People stopped riding the buses all because of Rosa Parks. Soon, the police were informed of the people standing on the street corners watching the buses drive by. The police watched the streets to make sure that the black people were not bothering the other bus riders. They tried guarding the bus stops. The police failed and the boycott was a success. A few months later, Rosa Parks once again started to climb aboard a bus. She stopped when she noticed a sign that read, “People don’t ride the bus today. Don’t ride the bus for freedom.”

Finally the rules for riding the buses were changed.

1. Black and white people could sit wherever they wanted to sit.

2. Bus drivers were to respect all riders.

3. Black people were now allowed to apply for driver positions.

A lot of people wrote hate mail to Rosa Parks. Some people called and threatened her and her family. She and her family were scared. 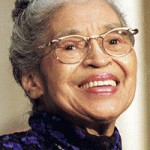 They knew they were in serious danger, but, Rosa Parks would not give up. Rosa Parks became a great hero.

In 1979, Rosa Parks received the Spingarn medal. In 1980, at the 25th anniversary celebration of the bus Boycott, Rosa Parks was awarded the Martin Luther King, Jr. nonviolent-peace prize. In 1984, Rosa Parks was given the Eleanor Roosevelt Woman of Courage award. Rosa Parks is known as a national hero and as a shy girl who stood up against racism and fought for freedom.