Richard P. Feynman was born in 1918 in Brooklyn; in 1942 he received his Ph.D. from Princeton. Already displaying his brilliance, Feynman played an important role in the development of the atomic bomb through his work in the Manhattan Project.

In 1945 he became a physics teacher at Cornell University, and in 1950 he became a professor at the California Institute of Technology. He, along with Sin-Itero and Julian Schwinger, received the Nobel Prize in Physics in 1965 for his work in the field of quantum electrodynamics. Another great achievement of Dr. Feynman’s was the creation of a mathematical theory that accounts for the phenomenon of super fluidity in liquid helium. Along with Murray Gell-Mann, Feynman did fundamental work with weak interactions like beta decay. Years later, Dr. Feynman was an important part of the development of quark theory by putting forward his parton model of high-energy proton collision processes. Furthermore, Dr. Feynman introduced new computational techniques and notations into physics, most importantly, the Feynman diagrams that perhaps more than any formality in recent scientific history, have altered how basic processes of physics are calculated and 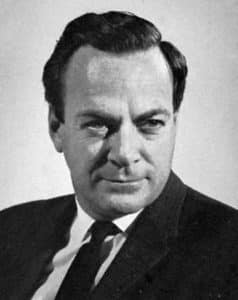 conceptualized. Feynman was considered a superb teacher, and received many awards and honors, the one he admired most being the Oersted Medal for Teaching, which was awarded to him in 1972. Critics and fellow scientists around the world held many of his publications in high esteem, and his some of his works were written for the general public, so that all people might have an opportunity to grasp the basic concepts of physics. His more advanced writings have become important assets to researchers and students; some of his works have even made their way into textbooks. Another of his most famous contributions is his work in the Challenger investigation when it crashed in 1986. His notorious demonstration of the O-rings to cold was during this research, an experiment that required no more than a glass of ice water. However, less known to the public was Feynman’s efforts on the California State Curriculum Committee in the 1960’s when he fought against the mediocrity of current textbooks.

Sadly, Richard Feynman died on February 15, 1988, in Los Angeles. Six Easy Pieces is a compilation of six of Dr. Feynman’s lectures all dealing with the easier aspects of physics. These lectures come from the famous Lectures on Physics that contains all of the lectures that Dr. Feynman used to teach his students at Caltech University. Feynman was different from most physics teachers of his time, he was a revolutionary; he taught an approach that was less mathematical and more theoretical, but many feel he makes it easier to learn the concepts. His diagrams, famous throughout the science world, detail his every word and give visual assistance to the struggling student. As the book progresses from chapter to chapter, Feynman takes the reader deeper into the heart of physics, while still relating each concept to something that the general public will understand. His use of analogies and thorough explanation makes the material easier to comprehend. Still, the book is by no means easy reading; only through careful analysis and attentiveness was I able to grasp the messages that Feynman was attempting to convey. In the sixth chapter, “Quantum Behavior,” Feynman gives the reader a taste of his passion, as he expounds on the field with which he devoted much of his career to. Obviously, Feynman wanted to use this novel to educate the minds of people who have some interest in the field of science. He wanted to give the reader a taste of what physics has to offer; he does not intend to teach the reader everything about physics, even he says that there is too much material to teach it all to a student in even four years of college. Still, there is more than enough information for the reader to gain a general idea of what can be learned through physics, Feynman is attempting to entice his readers to go out and learn more and not just stop with what this one book provides them. Clearly stated in his introduction, Feynman says that these lectures are designed to, “Maintain the interest of the very enthusiastic and rather smart students coming out of the high schools and into Caltech.” He truly wants to capture the desire of his students and show them all that physics has to offer. This statement comes from the introduction of both Six Easy Pieces and Lectures on Physics, the complete series of what is started in this book.

Though originally not written for both books, it does apply to both, which is why it is included. Feynman was 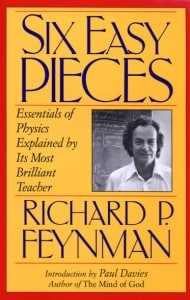 hoping to broaden the scale of his readers when he lightened the amount of information that is presented to the reader. Also, Feynman wanted to document all of his knowledge so that it might be available to future generations, he was attempting to immortalize himself through the publications he left behind, and will always be remembered for them. He was truly a revolutionary thinker, and he earnestly desired to share that with the world. He dedicated his life to the advancement of modern physics, and hoped that his writings would inspire a young avid physicist to take up where he left off and trek onward into the discovery of the laws of physics. This book is, as I have mentioned, a compilation of several lectures. Personally, I do not enjoy listening to or reading lectures, I much prefer an interactive style of learning. Therefore, I cannot say that I liked reading this book. Though it was enlightening, at times it was boring and I had to push through it and constantly make myself continue. However, I would have liked to sit in on a class that Dr. Feynman taught, because from all of his diagrams and scientific analogies, I think that he was the kind of teacher that used demonstrations during his lectures to emphasize his point. I honestly enjoy science, and I think that it would be an honor to have attended a class of this highly credited physicist. Though not my favorite novel, finishing it did give me a certain feeling of satisfaction; I felt that I had accomplished something. Moreover, I was glad that I had made myself continue because there were many interesting topics in this book, and I did learn a lot about physics. I suppose one could say that this book caused me to have a bit of an attitude change; I now see things in a new light, I also understand more about how this world works, and what it is really like. I wish that I was able to view all of the illustrations that Feynman presented to me throughout the course of these lectures. I think that he must have had an amazing capacity for knowledge from the way he describes what cannot be seen, only deduced.

I have always held the subject of physics in high regards, it is at the top of the scientific ladder, and Feynman puts it within the reader’s grasp. It overwhelms me to think that he could have actually made a new development in such a demanding field of study; the ability to learn and comprehend all that we currently know about physics is quite an accomplishment. I believe that people such as Feynman are paving the way for the future of the world; one-day physics will be taught in grade school and will be as easy to learn as reading. Who knows what advanced concepts will be reserved for high school and college, but they will be far more complicated than anything that we can fathom now, at this point in history. Remember, there was a time when computers were so complicated that only the most skilled scientists could operate them, but now I see elementary school students who are already more computer literate than most adults. It is exciting to think of where the field of physics will be after a few centuries. It is people like Richard Feynman who push our current society into the bold unknown; he challenges and captivates the minds of his students and pushes them to excel in their fields of study. Forerunners such as Feynman are creating a new generation, and with each passing genius, the most difficult concepts become easier to comprehend and teach. Eventually, the new ideas that Feynman presented will be as common as the existence of gravity. This book appeals to a wide scope of people; it relates the complicated aspects of physics in a manner that can be understood by much of the general public. More than that, this novel gives the reader a glimpse into Feynman himself. The reader can now see how he thinks and functions, additionally, it allows the reader to preview what it may have been like to be in one of Feynman’s classes. This man is considered a modern day genius, and just the chance to further see what he is actually like, is something that allows for this book to be valued more highly. Additionally, this book tackles an extremely difficult topic that is considered to be one of the most complex subjects in higher learning. Feynman is undaunted by this, he takes the known principles of physics and presents them in a new light, and should be praised for his ability to demonstrate such a complicated subject to so many people in such a way that even the common man can grasp these basic principles of physics. Thus, Richard Feynman’s book Six Easy Pieces is more than worthy of achieving high literary merit.