Richard Milhous Nixon came from a family with a strong heritage. His father’s side of the family were Methodists originally from Scotland. Then, in the early 1600s, they migrated to Ireland, and to America in the 1730s. His grandfather, George Nixon, died in the Battle of Gettysburg during the Civil war. Richard’s father, Frank Nixon, was born in Ohio. His mother died when he was only 7, and he left home when he was only 14. He went from town to town doing odd jobs and eventually made his way to California where he met his future wife, Hannah.

Nixon’s mother’s side of the family was originally from Germany. They then migrated to England around 1688, where they became 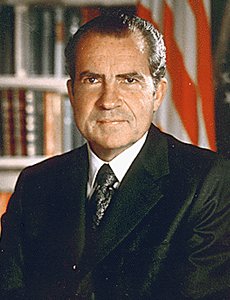 Quakers. From England they migrated to Ireland, and from Ireland to America. During the civil war they were part of the underground railroad. Richard’s mother, Hannah Milhous, was born in Indiana, but her family moved and she grew up in Whittier, California, where she met Frank Nixon. They fell in love at first sight, and were married four months later in June 1908. Frank converted to Quakerism.

The Nixon family lived on the edge of poverty. The lemon ranch didn’t make enough money to provide for the family of seven, so Frank started doing odd jobs (namely building houses) AND ran the lemon ranch to provide for his family. In 1922, the Nixon’s moved back to Whittier, and things took a turn for the better. Frank bought a plot of land and built a gas station and a general store on it. Business was good, but it took much work to keep the store running. The whole family worked hard at the store and the children worked hard at school. But tragedy struck in 1925. Arthur died.

Richard was always a serious child. By the age of six, he was already reading the newspaper and talking politics with his father. He was a good public speaker, and by junior high school, he was a master debater. He tried his hardest to get the best grades in school. In 1926, he entered high school. He was very busy. He did his schoolwork, he studied, he helped with the store, he went to church, he played football, he played basketball, he ran track, he was on the Latin Club, he was on the debate team, he was on the school newspaper staff, he played violin for the school orchestra, and he got very little sleep. His junior year he decided to study law and become a politician. In 1929, his senior year, he won a part scholarship to Harvard University, but couldn’t accept. Due to the economic depression that was over the country, Nixon didn’t have enough money to pay for the rest of the immense cost to go to Harvard. But in 1930, he entered Whittier College.

In 1933, tragedy struck again and Harold died of tuberculosis. But that was also a year of personal triumph for Richard when he was elected president of the student body. In 1934, Richard graduated from Whittier College, second in his class. He then applied for a full scholarship to Duke University Law School, and was granted it.

In 1936, Nixon was elected president of the Duke Student Bar Association. In 1937, Nixon graduated with honors, third in his class. He returned to Whittier and was hired by the respectable Wingert and Bewly Law Firm. When he returned to Whittier, he met Thelma “Pat” Ryan at tryouts for a play (Nixon also liked to act). He, like his father, fell in love at first sight. Even before he and Pat went on a single date, he said, “I’m going to marry you someday.” And, true to his word, Nixon married Ryan on June 21, 1940.

In 1941, Nixon was offered a government job with the OPA. He took it, and he and Pat moved to Washington. In 1942, during WWII Nixon applied for sea duty with the U.S. Navy, but wasn’t accepted. He tried again and was assigned to a base in the South Pacific. Pat found a job and moved to San Francisco. Richard went to sea.

Nixon was sworn into Congress on January 3, 1947. He requested to be assigned to the labor committee. It was through this committee that Nixon met John F. Kennedy. Kennedy and Nixon both had different ideas, but they respected each others opinions. Nixon was also assigned to the House Un-American Activities Committee (HUAC). In June 1948, he was reelected without opposition. On July 5, 1948, the Nixon’s second daughter, Julie, was born.

That fall, Democrat Harry Truman was elected president. Unfortuna-tely for the Republicans, the Democrats now had the congressional majority. In 1950, Nixon decided to run for Senate. He got the Republican nomination in June, and would face Democratic candidate Helen Gahagan Douglas. Nixon won by a landslide and was elected for a six-year term. But he only served two of those years.

In 1952, as Dwight Eisenhower’s running mate, he was elected Vice President of the United States. Nixon would serve eight years as Vice President. On September 24, 1955, Eisenhower suffered a severe heart attack, and for nearly two months (while Eisenhower was in the hospital) Nixon was acting President. In 1956, the same year Eisenhower and Nixon ran for reelection, Frank Nixon, Richard Nixon’s father, died. In 1957, Nixon and Martin Luther King, Jr. met in Washington and discussed Nixon’s efforts to promote a civil rights bill. On Nov. 25, 1957, President Eisenhower suffered a stroke, and again Nixon acted President. In 1960, Nixon was nominated to be the Republican candidate for President. His opponent was John F. Kennedy, to whom he lost in a close race.

After his defeat, Richard and his family moved back to CA, where Nixon practiced law again for a short time. In 1962, he ran for governor of CA, but lost to Edmund G. Brown. In 1963, the Nixons moved to New York, where Richard joined a law practice with international clients. In 1964, Lyndon Johnson was elected President. He beat the Republicans by a landslide.

In 1968, Nixon was nominated to be the Republican candidate for the Presidency. He would face Hubert Humphrey. It was a close 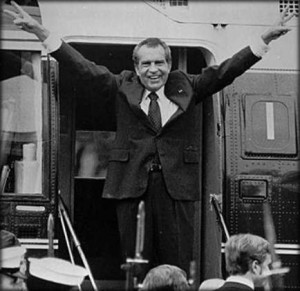 race, but Nixon wound up being the winner. During Nixon’s first term as President, he accomplished many things. He passed strong new anti-crime laws, he had the military draft reduced then eliminated, he cut taxes, and he made progress with civil rights and equal opportunities for women. He also made great strides in foreign relations. In 1972, Nixon talked to Russian leaders and came up with the Strategic Arms Limitation Treaty (known as the SALT agreement) which limited the production of nuclear arms in both the U.S. and Russia. Nixon also had microphones installed in many White House offices. He believed this would help prevent information from being leaked to the media, but it also brought about his downfall.

In 1972, Nixon was nominated to run for a second term as President for the Republicans. His opponent was George McGovern for the Democrats. That summer five men were arrested on charges of breaking into the Democratic National Headquarters in the Watergate Hotel in Washington. On Sept. 15, 1972, formal charges were brought against seven people involved with the Watergate break-in. However, Nixon still won the election by a landslide. Nixon then tried to cover-up the Watergate affair to protect himself and his aids. On Oct. 10, 1973, Nixon’s Vice President, Spiro Agnew, resigned. Nixon chose Gerald Ford to be his new V.P. But Watergate was causing problems with Nixon’s Presidency, and on August 9, 1974, Nixon resigned from office, the first president to ever do so.

The Nixons moved to their house in San Clemente, and in Sept., 1974, President Ford pardoned Richard from any wrong he had done while in office.  While living in San Clemente, Nixon spent most of his time playing golf and writing. In 1978, Nixon published a book entitled RN: The Memoirs of Richard Nixon. In 1980, The Nixons moved to New York and Richard wrote The Real War. In Oct., 1981, the Nixons moved to Saddle River, New Jersey. There, Nixon wrote four more books: Leaders in 1982, Real Peace: A Strategy for the West in 1983, No More Vietnams in 1985, 1999: Victory Without War in 1988, In the Arena in 1990, and  Seize the Moment in 1992. Unfortunately, in 1993, Pat Nixon died, and less than a year later, on April 22, 1994, Richard Milhous Nixon, the thirty-seventh President of the United States of America, died. He was buried in Yorba Linda, CA, in the same town as his birth.

Should mention be made that #37 opened up dialogue with the ccp ( disaster ) and took the dollar off the au standard + did not address the gasoline 1st gasoline crisis in any way beneficial to the American public; and instead created what became known as Petro Dollars, further eroding the once coveted dollar, which will be made obsolete by the currency of the nations of BRICS.