Ralph Waldo Emerson certainly took his place in the history of American Literature. He lived in a time when romanticism was becoming a way of thinking and beginning to bloom in America, the time period known as The Romantic Age.  Romantic thinking stressed on human imagination and emotion rather than on basic facts and reason.  Ralph Waldo Emerson not only provided plenty of that, but he also nourished it and inspired many other writers of that time.  “His influence can be found in the works of Henry David Thoreau, Herman Melville, Walt Whitman, Emily Dickinson, Henry James, and Robert Frost.”.

No doubt, Ralph Waldo Emerson was an astute and intellectual man who influenced American Literature and has rightly received the credit 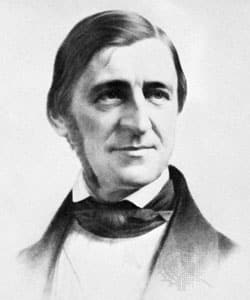 that he deserves from historians.  He has been depicted as a leading figure in American thought and literature, or at least ranks up there with the very best.  But there is so much more to Ralph Waldo Emerson when we consider the personal hardships that he had to endure during the course of his life and when we see the type of man that he becomes. He certainly was a man of inspiration who knew how to express himself by writing the best of poems and philosophical ideas with inspiration.

He was born on May 25, 1803 and entered into a new world, a new nation just beginning.  Just about eight years later, his father would no longer be with him, as William Emerson died in 1811.  The Emerson family was left to a life marked by poverty.  Ralph’s mother, Ruth, was left as a widow having to take care of five sons.  However, Ralph’s life seemed to carry on smoothly.  He would end up attending Harvard College and peruse a job of teaching full time.  While teaching as a junior pastor of Boston’s Second Church, his life gained more meaning when he married Ellen Louisa Tucker.  Journal entries and love letters he wrote at that time expressed lots of feelings and emotions that he had.  But after two short years of marriage, Ellen died of tuberculosis.  Suddenly, the one true person he had in his life was gone.  Life was losing it’s meaning, and Ralph Waldo Emerson was in need of some answers.  This dark period drove him to question his beliefs.  Emerson resigned from the Second Church and his profession as a pastor in search for vital truth and hope.  But his father and wife were not the only deaths that he had to deal with.  His strength and endurance would be put to the test much further with a perennial line of loved ones dying.  His brother Edward, died in 1834, Charles in 1836, and his son Waldo (from his second wife Lydia Jackson) in 1842.  After such a traumatic life, you might expect that Emerson, like any other person, would collapse into severe depression, lose hope, and lose meaning to his life.  But Emerson was different.  He found the answers within himself and rebounded into a mature man.

After surviving a mentally hard life, Ralph Waldo Emerson seemed to gain more discernment toward life.  Wisdom is gained through experience.  By 1835, Emerson’s rare and extravagant spirit was ready to be unleashed.  All his deep feelings, emotions, and thoughts fabricated truth the way he arrived at truth, within himself.  “To believe your own thought, to believe that what is true for you in your private heart is true for all men- that is genius.  Speak your latent conviction and it shall be the universal sense; for always the inmost becomes the outmost-and our first thought is rendered back to us by the trumpets of the last judgment.”  Emerson fully believed this and supported it by taking part in a new philosophical movement called Transcendentalism.  In 1836, his first boot, Nature, was published.  Nature expressed the main points of Transcendentalism.  With this, Ralph Waldo Emerson started the Transcendental Club the same year.  This club published a magazine called The Dial, fully promulgating philosophy, literature, and Emerson’s truth fearlessly.  He was starting to gain recognition.  The young were opening their minds, and the old were impressed.  Harvard was so impressed of him that they asked him to give several addresses.  In 1837, he gave a well-known address called “The American Scholar” in which he outlined his philosophy of humanism.  A year later, he gave another address, called “The Divinity School Address.”  This argued about Christianity at that time for being too traditional and ritualistic in its ways.  These methods didn’t fill the people’s spiritual need.  Emerson showed his liking under a new religion founded by nature.  Truly, by the crowds that he drew, Emerson refreshed the minds, of people who were thirsting for some truth.  And who better to provide this than Emerson himself, who, through many distresses, searched within himself and became a man with life again.

This man, of inspiration, full of truth, goodness, and beauty became a part of classic American literature.  His expressions were absorbed into some of the most exceptional essays, poems, and philosophical ideas ever created.  His famous essays are “History,” “Art,” “The Poet,” and the famous “Self-Reliance.”  He gathered his essays into two volumes.  The first was released in 1841, and the second was released in 1844.  Poems however, also made Emerson’s reputation as a erudite man.  His poems were enjoyable as well as thought provoking to many.  “Each and All,” was a poem that supported his beliefs.  “The Rhodora,” as well as “The Humble Bee,” and “The Snow Storm,” touched on the greatness of nature.  Emerson also expressed himself through poems such as “Uriel,” “The Problem,” “The Sphinx,” and the well-known “Days.”  Many of these works of Emerson have taken their place in the history of American literature.

Thus, we now see what truly a great man Emerson was.  We gain a deep respect for him when we consider the hardships that he had to face, how he endured those problems, and the minds that he opened and touched by his wonderful works.  In conclusion, we can truly say that Emerson is well deserving of the credit he received from historians.