Ralph Vaughan Williams, descended from the famous Wedgwood and Darwin families, was born at Down Ampney, Gloucestershire in 1872. In 1890 he entered the Royal College of Music, and in 1892 he entered Trinity College, Cambridge. One of the greatest of the British composers, a prolific writer of music, folksong collector, and champion of British cultural heritage, he died aged 85 in 1958. His ashes are interred in Westminster Abbey alongside the nation’s greatest artists and poets.
Symphony No. 5 in D

The symphony contains a lot of material from RVW’s then unfinished opera, The Pilgrim’s Progress. When he began the Fifth Symphony, RVW 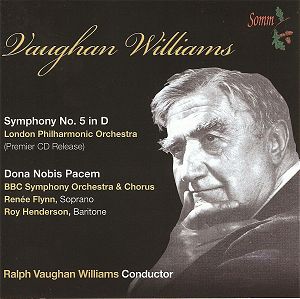 thought he may never finish the opera, and didn’t want to waste any good ideas. The symphony does not have a programme, it is absolute music. It is in four movements: a “Preludio” first movement, a Scherzo, a “Romanza” slow movement, and a “Passacaglia” finale.

From the very beginning, RVW puts the key signature of this movement into doubt. The movement opens with a horn call in D, set against a firm base (or bass?) of octave C’s. Could it be that in the great traditions of British musical ‘amateurism’, RVW got his transposition wrong? Or is this a deliberate feature of the music, intended to blur the tonality? Musicologists prefer the latter explanation. This is by no means an unusual feature of his music, when he was asked what the 4th symphony was about, RVW replied “It is about F-minor”, alluding to his sometimes hazy tonalities, often augmented by his use of modal, mainly pentatonic melodies, which, with no leading note, often help to ‘fudge’ the tonality. Apart from the horn call, the brass is seldom used, and the texture is light and airy. The first violins then enter, high on the E string, doubled at the octave below by the seconds in an introduction, before their main theme at (1), doubled by flutes. The triplets add rhythmic variety, as well as providing a distinctly ‘folkie’ feel. During the course of the movement, the distinctive dotted rhythm of the horns hardly ever leaves us. There are some rather abrupt key changes. i.e. Eb to E at (5). We are taken into the Allegro by a sudden change in mood. The music darkens with a slightly sinister version of the horn call in the bassoons. We then enter the Allegro, with a scurrying in the strings, whilst the wind begins a downward progression of notes, which builds to a climax, with strings in semiquavers, until we reach the original tempo once more, as the music winds down, back to the horn call. Some development of ideas takes place, before the music once again winds down. The horn calls are answered by single notes in woodwind, and the movement ends as mysteriously as it began – the horns fade into the distance, in the key of D, but we are left, somewhat perturbed by the pianissimo cello C against the viola D.

READ:
Lord of The Flies: Chapter 1 Characters, Themes, and Analysis

The movement is plainly 20th century, with many dissonances, yet the movement, for the most part, sounds serene, with a sinister undertone that barely breaks the surface. Much of this softening comes from RVW’s orchestration: he tends to work in distinct “chunks” of sound. In the opening measures, for example, the low cellos and basses are separated from the higher horns in range and sound color.

The movement starts with rising string fourths, which seem to come from nowhere. This time, it is the time signature of the movement that we must look out for. The piece starts in dotted minims, but then the note values become minims, before the seventh bar, in which a rather jaunty tune begins, and continues through a rather melancholy unison entry by flute and bassoon., which is continued in woodwind, until we reach a short staccato section, just before (2), where there is a rather absurd quaver dialogue between woodwind and strings. More staccato work from strings leads to a rather fat sounding appoggiated dotted minim passage for oboe and cor anglais. Here we get passages of two against three, in the tune. After the double bar after (14), we get that nimble staccato passage back, this time pianissimo, it all has a rather tongue – in – cheek feel to it, accentuated by the slightly heavy bass. The strings endure another scurrying passage, then after (17), a new, almost fatalistic downwards theme is introduced, which gradually gains in intensity, until it is eventually played tutti. The first theme, with its rising fourths re – enters pp, and this movement ends suddenly, with a cheeky downwards run, from the ‘top’ of the strings, to the ‘bottom’.

Strings play largely at the unison or octave throughout this movement, and winds are usually reduced to solos or duets. When there is a lot of woodwind, the strings drop out, fitting in with the contrasting planes of sound discussed in the first movement.

READ:
Lord of the Flies: Where Did Ralph Go Wrong?

An almost ethereal chord progression in (heavily) divisi strings announces a melody, which begins with the almost obligatory triplet rhythm in the cor anglais. Rising 4ths then lead to a broad tune in the strings, which subsides into the flute, oboe, cor anglais, and clarinet playing the rising 4ths once more. This leads to a repeat of the opening section, but scored the opposite way round, with woodwind playing the chords, and the melody , still pp, in the strings. It is scored very low fr the violins – in fact, the first four Gs must be played open, with no vibrato to soften them. Very agricultural. We then get a bigger statement of the broad tune, followed by some birdsong – like passages from woodwind, which develop thematically until we reach the Poco Meno Mosso at (7), where rustling strings accompany the first theme on horns, then trumpets. Brass chords lead us back to the main string tune, which leads on to the ‘big tune’, and the climax of this movement. A solo violin reminds us of the woodwind’s birdsong theme. The ethereal string chords reappear, with a horn melody over the top, and muted strings finally send this movement to sleep.

The passacaglia theme begins, as usual, in the bass — a descending line. A bit in, a rising counter-melody sneaks in through the upper parts. This reaches a small climax after 5 repetitions, at which point the bass fragments into pizzicato. Three more repetitions follow, rising to a ‘fanfare’ section. This plays against the passacaglia’s counter-melody.

The fanfare reaches a climax which quickly leads to an agitated version of the passacaglia on clarinet and other woodwind, against tremelando strings (pp). The rumblings grow to three ‘outcries’ of this version. We then hear a disturbed version of the counter-melody, leading to a large climax on the original passacaglia theme.

This breaks into music from the first movement, the Preludio, signifying that we have come full circle, and the end is near. Various themes from the first movement float make special guest appearances, which leads to a quiet extended fantasia on the counter-melody, fanfare, and passacaglia. The movement ends with the violins playing extremely high minims – a very serene ending.