Oscar Wilde (real name Oscar Fingal O’Flahertie Wills Wilde) was born on October 16th, 1854 in Dublin. His father, William Robert Wilde, was an eminent eye doctor, with an interest in myths and folklore. He was the founder of the first eye and ear hospital in Great Britain, as well as the appointed Surgeon Occultist to the Queen, who knighted him. His mother, Jane Francesca Elgee Wilde, was a poet who wrote patriotic Irish verse under the pen name Speranza, and had a considerable following. As a youngster, Wilde was exposed to the brilliant literary talk of the day at his mother’s Dublin salon.

In 1864 Wilde entered the Portora Royal School at Enniskillen, and in 1871 entered Trinity College in Dublin. In 1874 he left Ireland and went 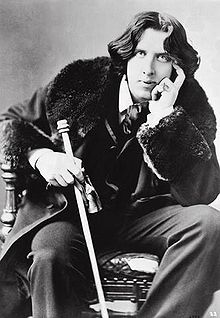 to England to attend Magdalen College at Oxford. As a student there, he excelled in classics, wrote poetry, and incorporated the Bohemian life style of his youth into a unique way of life. He came under the influence of aesthetic innovators such as English writers Walter Pater and John Ruskin. He found the aesthetic movement’s notions of “art for art’s sake” and dedicating one’s life to art suitable to his temperament and talents. As an aesthete, Wilde wore long hair and velvet knee breeches, and became known for his eccentricity as well as his academic ability. His rooms were filled with various objets d’art such as sunflowers, peacock feathers, and blue china. Wilde frequently confided that his greatest challenge at University was learning to live up to the perfection of the china. Wilde won numerous academic prizes while studying there, including the Newdigate Prize, a coveted poetry award, for his poem Ravenna. In 1879 Wilde moved to London to make himself famous. He set about establishing himself as the leader and model of the aesthetic movement. Besides his hair and breeches, he added loose-fitting wide-collared silk shirts with flowing ties and lavender colored gloves. He frequently carried a jewel-topped cane and was caricatured in the press flamboyantly attired and holding an over- sized sunflower, an icon of the movement.

Wilde quickly became well known despite having any substantial achievements to build on. His natural wit and good humor endeared him to the art and theater world, and through his lover Frank Miles, he found it easy to become part of the cliques that frequented London’s theater circuit and drawing rooms. He became a much desired party guest, and eventually his popularity led to his being chosen as an advance publicity man for a new Gilbert and Sullivan operetta, Patience, that spoofed aesthetes like himself. In 1881, Wilde’s first book of poems, called Poems, was published. In 1882, short of money, he accepted an invitation to embark on a lecture tour of America. He produced his first play in New York City, called Vera, about nihilism in Russia. According to some, it was canceled at the last moment, probably for political reasons; others say he saw it performed there but that it ran unsuccessfully. Throughout that year he lectured in 70 American cities as well as Ontario and Quebec in Canada on the arts and literature. The tour was an unmitigated smash and Wilde returned to London in 1883 in triumph and richer by several thousand pounds. By the time he returned from America he had already tired of being the Great Aesthete and began dressing more conventionally. He did a successful tour of the U.K. He also wrote his second unsuccessful play, The Duchess Of Padua. In 1884, he married Constance Lloyd, the daughter of an Irish barrister. They had two sons, Cyril and Vyvyan. The family moved into a house in Chelsea, an artist section of London. In 1887, he took a job at Woman’s World, a popular magazine for which he wrote literary criticism. In 1888 he published The Happy Prince and Other Tales, a collection of original fairy tales which he wrote for his sons.

Two years later he tired of journalism and journalists. He returned to partying and spending his time with friends and lovers, often overstepping the bounds of what was considered morally and socially proper for the time. In 1890 his novel, The Picture Of Dorian Gray, was published in Lippincott’s Magazine. It raised a storm of protest to thinly veiled allusions to the protagonist’s homosexuality. In 1891 he published Intentions, a collection of dialogues about the aesthetic philosophy; Lord Arthur Savile’s Crime, a collection of short stories; and A House Of Pomegranates, a collection of children’s’ stories. He also produced The Duchess Of Padua. In that same year he met and befriended Lord Alfred Douglas, the son of the Marquess of Queensberry. In 1892, he produced Lady Windermere’s Fan; in 1893, A Woman of No Importance; and in 1895, the Importance of Being Earnest, which was hailed as the first modern comedy in English, as well as An Ideal Husband. All were very successful, and Wilde became the toast of London. His only setback in these years was with his play Salome, originally written in French, which was banned by Lord Chamberlain under an old law forbidding theatrical depiction of biblical characters. Renowned actress Sarah Bernhardt, who was to appear in the play, produced it in Paris in 1894. Thirteen years later German composer Richard Strauss turned it into a successful opera. In 1895, Wilde began flaunting his off-and-on relationship with Douglas in public. Outraged by this, the Marquess of Queensberry left a visiting card at Wilde’s London club, the Albemarle, upon which he had written, “To Oscar Wilde posing as a somdomite” (sic). Wilde sued him for libel but lost the case and was charged with homosexual offenses. The jury failed to reach a decision but at a second trial he was found guilty and sentenced to two years in Reading Gaol, a labor prison.

There Wilde was declared bankrupt, and his house and possessions were sold to pay off his debts. An Ideal Husband and The Importance of Being Earnest, which were both running very successfully, were closed.  In 1897, while in prison, Wilde wrote a 30,000 word letter to Douglas, published after his death with the title De Profundis, which was a moving description of his spiritual progress to religious insight. It is regarded as possibly being his most important and mature statement on life and art in general, and his own life and art in particular. Wilde left prison on May 19th, 1897 and left For France. He began wandering around Europe using the alias Sebastian Melmoth (Sebastian was the Christian martyr slain in a hail of arrows). In 1898 he published his best-known poem, The Ballad of Reading Gaol, a gripping account of prison brutality based on his own harrowing experiences with a plea for prison reform. This came that same year with The Prisons Act, which was partly due to his writing. Also that year came the death of his wife.

During these last years Wilde sank deeper into a despair from which none of his friends could extricate him. He was in poor health, living on borrowed money and the kindness of friends and sympathetic hotel managers. In 1899 he was baptized by the Roman Catholic Church. He died on November 30th, 1900, in Hotel d’Alsace in Paris, suffering from cerebral meningitis. Among his last words were, “It’s the wallpaper or me – one of us has to go.” He was buried at Pere LaChaise cemetery in Bagneaux. Lord Alfred Douglas was one of the attendees at his funeral. In 1912 a monument to him was erected at the gravesite by an anonymous woman.