1. To investigate man’s ability to survive and perform in the space environment and

NASA also had to find astronauts to fly the spacecraft. In 1959 NASA asked the U.S. military for a list of their members who met certain qualifications. All applicants were required to have had extensive jet aircraft flight experience and engineering training. The applicants could be no more than five feet eleven inches tall, due to the limited amount of cabin space that the Mercury modules provided. All who met these requirements were also required to undergo numerous intense physical and psychological evaluations. Finally, out of a field of 500 people who met the experience, training, and height requirements, NASA selected seven to become U.S. astronauts. Their names, Lieutenant M. Scott Carpenter; Air Force Captains L. Gordon Cooper, Jr., Virgil “Gus” Grissom, and Donald K. “Deke” Slayton; Marine Lieutenant Colonel John H. Glenn, Jr.; and Navy Lieutenant commanders Walter M. Schirra, Jr., and Alan B. Shepard, Jr. Of these, all flew in Project Mercury except Deke Slayton who was grounded for medical reasons. He later became an American crewmember of the Apollo-Soyuz Test Project.

The Mercury module was a bell shaped craft. Its base measured exactly 74.5 inches wide and it was nine feet tall. For its boosters NASA chose two U.S. military rockets: the Army’s Redstone, which provided 78,000 pounds of thrust, was used for suborbital 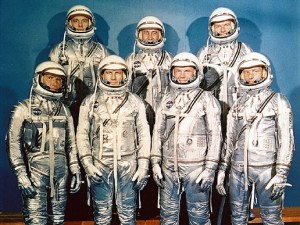 flights, and the Air Force Atlas, providing 360,000 pounds of thrust, was used for orbital fights. The Mercury craft was fastened to the top of the booster for launch. Upon reaching the limits of Earth’s atmosphere the boosters were released from the module, and fell into uninhabited ocean. The first Mercury launch was performed on May 5, 1961. The ship, Freedom 7, was the first U.S. craft used for manned space flight. Astronaut Alan Shepard, Jr. remained in suborbital flight for 15 minutes and 22 seconds, with an accumulated distance of 116 miles. The second and final suborbital mission of the Mercury Project was launched on July 21, 1961. Gus Grissom navigated his ship, Liberty Bell 7, through flight for just 15 seconds longer than the previous mission.

The next Mercury flight was accomplished using an Atlas booster. On February 20,1962 it fired up and launched John Glenn, Jr., inside Friendship 7, into orbit. Glenn orbited Earth three times and when he returned the country celebrated. Just three months later on May 24 Scott Carpenter also orbited Earth three times in Aurora 7. On October 3, 1962 Walter Schirra, Jr. entered Earth’s orbit in his ship, Sigma 7. He completed 6 orbits and then completed the first splashdown in the Atlantic Ocean. All previous splashdowns and recoveries were performed in the Pacific. The final Mercury mission was the longest. Launched into orbit on May 15, 1963, Faith 7, with Gordon Cooper, Jr. inside, went around Earth 22 times in 34and a half hours. On May 16 it too splashed down in the Atlantic Ocean where it was recovered, successfully ending the Mercury Project. The Mercury Project, five years and $392.6 million dollars after it began, came to a close. The entire project was highly successful, achieving both of its goals. It paved the way for the next generation of NASA spacecraft: Gemini.