Mercury is the closest planet to the sun.  Its average distance from the sun is approximately fifty-eight million km and it’s diameter is 4875 km, making it the second smallest planet in our solar system.  Its volume and mass are about 1/18 that of the earth and its average density is approximately equal to that of the earth.  Mercury’s magnetic field is one-hundred times weaker than that of Earth’s.  Mercury has the shortest revolution of all the planets in our solar system and revolves around the sun in about eighty-eight days.  Radar observations of the planet show that its period of rotation is 58.7 days, or two-thirds of its period of revolution.  That means that Mercury has one and one-half days in its year.

Mercury doesn’t have an atmosphere, but it does have a thin layer of helium.  The helium is actually solar wind that is trapped by 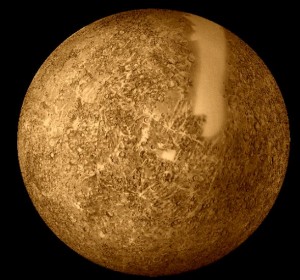 Mercury’s weak gravity.  Scientists think that collisions with protoplanets early in the history of the solar system may have stripped away lighter materials, making Mercury a very dense planet with an iron core extending outwards 4/5 of the way to the surface.

Mercury bares a very similar resemblance to our moon because it has a lot of craters.  The craters, which cover seventy-five percent of Mercury’s surface, were formed by huge rocks that smashed into the planet’s surface.  The largest crater is called the Caloris Basin and it is 1400 km in diameter and is flooded with molten lava.  Mercury also has many cliffs that are usually over 300 miles long and two miles high.  The rest of the planet’s surface is smooth and may have been formed by lava flowing out of cracks in the surface.

Mercury was a difficult planet to study before the invention of the telescope.  Even then, you could only see Mercury in the morning and evening. Then the Mariner 10 was built in the 1970’s to go observe Mercury.  The Mariner 10 spacecraft passed Mercury twice in 1974 and once in 1975 and it took hundreds of pictures of the planet.  After this, the Mariner 10 came too close to the sun and is now orbiting the sun.

Mercury has no known moons and it also has a double sunrise at perihelion (the point closest to the sun).  Mercury also has the widest temperature range (500 degrees between coldest and hottest) of all the planets.  But even with all this information, scientists still don’t know that much about Mercury.