As mentioned, the range of protein functions is enormous: from passive structural elements to active motor proteins and everything in between. What characteristics of proteins are required for them to carry out these functions? While these characteristics vary from protein to protein, there are some that can be found in most proteins. We will discuss 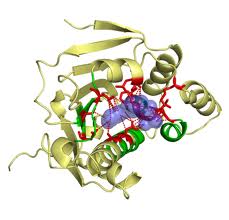 Proteins are also able to form surfaces with an incredible variety of shape and electronic topography because of the variety of properties of the side chains and the variety of tertiary structure (folding patterns) that can bring residues together in space. Thus many proteins have evolved to bind to particular molecules with great specificity, using multiple weak bonds. Generally a small area of the protein surface is complementary to the structure of another molecule (called a “ligand”). In the case of enzymes, this area is termed the “substrate-binding site” or just “active site”. Thus a protein might recognize just one or two out of thousands of other molecules in the cell. A protein can have multiple ligand binding sites that may interact so that binding of one ligand affects the binding of another.

A typical binding site of a protein is illustrated in. In this example, cyclic AMP is bound by the CAP protein. The points to note are the many H-bonds formed and the complementary shape of the protein and cyclic AMP. Tight binding requires the cooperative formation of many weak bonds, leading to the extreme selectivity observed.

Ligand binding is characterized by a dissociation constant, Kd, whose value is calculated from the affinity of the molecules for each other.

Collagen is an example of a fibrous protein. It forms very strong fibrils that strengthen bone, skin and basement membranes of arteries, veins, and many other tissues. Collagen is actually a family of proteins, with individual proteins given numbers: collagen I, II, etc. and various genetic diseases arise from mutations in one of the collagen genes (eg. osteogenesis imperfecta syndromes from mutation of collagen1a proteins). Collagen proteins undergo a complex process of maturation after their initial synthesis before secretion and assembly into fibrils. Collagens have an unusual amino acid composition. All 20 aa are present, but collagens are extremely rich in glycine; in fact every third amino acid residue in the sequence is glycine. Furthermore, collagen also has a very high proline content (about 20%). Many of these prolines are modified by hydroxylation to form hydroxyproline. Also, some of the lysines present are modified by hydroxylation to give hydroxylysines. All of these factors are important for the final structure.

The construction of a collagen fiber begins with the synthesis of an individual polypeptide. Different collagens have different lengths, but they are commonly quite long; more than 1000 residues. The initial polypeptide contains N- and C- terminal sequences that are later removed (propeptides). Once formed, the chains are hydroxylated in the endoplasmic reticulum by two different enzymes.

The enzyme prolyl hydroxylase is an iron-containing enzyme. The iron must be kept in the reduced state to maintain enzyme activity, which requires the presence of ascorbic acid (vitamin C). The disease scurvy results if not enough vitamin C is present in the diet and the prolines are not hydroxylated.

Once hydroxylated, three collagen strands assemble together by first associating at the C-terminal propeptide region, then winding around each other to form an extremely tight rope-like structure with frayed ends called a “procollagen” molecule. The hydroxyl groups on hydroxyproline form hydrogen bonds that help to keep the chains together. The small side chain of glycine at every third residue allows the chains to come close to each other. The high content of proline precludes alpha helical structure: instead a much more extended helical conformation is adopted (“polyproline type II helix”).

The hydroxylysine residues are necessary as sites of sugar addition (glycosylation) that increases solubility, and they also serve in a cross-linking reaction that creates covalent bonds between collagen chains. Procollagen is secreted and the propeptides are trimmed off by specific proteases to leave only the triple-stranded rope part. This “tropocollagen” molecule then assembles into ordered polymers called collaged “fibrils.” Covalent crosslinks are formed between neighboring molecules to give the final extremely strong fiber.

Antibodies are proteins produced by the immune system that bind tightly and specifically to foreign substances introduced into the body. They are essential parts of the defense system against bacteria and other parasites. Because of their amazing selectivity, antibodies have become powerful tools in medicine and for studying proteins.

There are several types of antibodies, but we will look at just one: immunoglobulin G or IgG. This is the most common type found in blood and is the most generally useful in biotechnology. The immune system is producing millions of different IgG molecules at any one time, each specifically able to bind a substance (the “antigen”). Each of these different IgG molecules has the same overall structure, but differs in one small region (the “antigen binding site”).  A single immune cell produces only a single IgG protein, but during an immune response many different cells will each make IgG molecules that bind a particular antigen and all these IgGs are found together in blood (“polyclonal antibody”). It is now possible to artificially obtain homogeneous IgG  (“monoclonal antibody”) that consists of identical IgG molecules.

IgG consists of two longer or “heavy” chains plus two smaller “light” chains, altogether forming a tetrameric molecule with a “Y” shape. Disulfide bonds link the chains together and stabilize the domains that make up the structure. These immunoglobulin or “Ig domains” consist of b sheets connected by loops to form a globular region. Heavy chains have 4 Ig domains and light chains have 2 Ig domains. The antigen-binding site is found at the tips of the “Y” and is formed by loops in the terminal Ig domains of the heavy and light chains.

Different IgG molecules have different amino acid sequences in these loops, and the different amino acid side chains will produce different surfaces, thus making antigen binding sites that differ in what they will bind. As in most protein interactions, multiple weak bonds are involved, requiring a strong complementarity in shape and electronic surface for the tight binding. Because of their differing sequences, the Ig domains involved are termed “variable” domains, while the other Ig domains are called “constant” domains. Thus a single IgG molecule will have 4 variable domains (one on each chain) and 8 constant domains.

Antibodies may also be used to purify proteins and to determine their locations in cells or tissues. For visualization, the antibody molecules are chemically tagged with a visible dye or enzyme before binding to the tissue. After washing away the unbound antibody, microscopy reveals the location of the bound antibody, and thus the antigen.

In the “Western blot” method, antibodies are used to detect proteins after samples have been separated by SDS-PAGE. The proteins in the gel are transferred to a membrane, which is then probed with an antibody. Detection of the antibody then reveals the presence of the antigen.