Nobelium has the symbol No and is a radioactive metallic element with an atomic number of 102.  Nobelium is in the actinide series 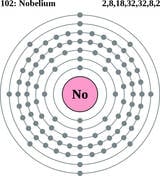 being labeled as one of the transuranium elements.  The element is named after Alfred Bernhard Nobel, the Swedish inventor and philanthropist.

Nobelium can be found when produced artificially in a laboratory. Discovery of the element was first claimed in 1957 by scientific groups in the United States, Great Britain, and Sweden, but the first confirmed discovery of a nobelium isotope was by a team of scientists at the Lawrence Radiation Laboratory in Berkeley, California and that took place in 1958. The isotope was created by bombarding curium isotopes with carbon ions.

Chemically, the properties of nobelium are unknown, but because it is an actinide, its properties should resemble those of the rare earth elements. Isotopes with mass numbers from 250 to 259 and 262 are known. The most stable isotope, nobelium-259, has a half-life of 58 minutes. The most common isotope, nobelium-255, has a half-life of a few minutes.