Robert F. Kennedy was born in 1925 in Brookline Massachusetts, and was raised with traditional family values. He was a true patriot, with a strong sense of nationalism. While Attending Harvard University, he saw that his country needed his help, so he put his undergraduate studies on hold to serve his country’s Navy in World War II. When he returned home, he finished his Bachelor’s degree at Harvard, and received an LL.B. from the University of Virginia Law. In 1951 he served as Attorney to the U.S. Department of Justice, but in 1952 he resigned to manage his Brother John’s senatorial campaign.

In 1953, he served as assistant counsel under Senator Joseph McCarthy’s permanent investigators subcommittee. He resigned in 1956 because 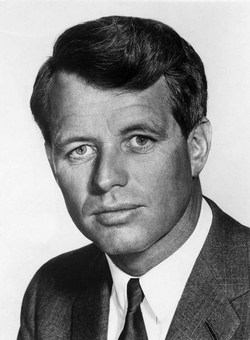 he didn’t agree with all of Senator McCarthy’s ideas and methods. He then in 1957 was elected to be chief council for the Senate Rackets’ committee. During that time he exposed mafia figureheads such as Jimmy Hoffa and Dave Beck. He seemed to be obsessed with dismantling the Mafia. Under his brother’s administration, he continued his attack on the Mafia. Robert Kennedy had no sympathy for the mob, nor did he care that he was being criticized by the media for his “harsh measures” such as his extensive use of wiretaps. In 1964 he resigned as Attorney General to subsequently gain a Senate seat from New York. While being a Senator, his views on government slightly changed. He was now paying more attention to the needs of the poor minorities, and was criticizing the involvement of the United States in the Vietnam War. In March of 1968, he announced that he would be running for President on the Democratic ticket. His charismatic personality appealed to voters of all ethnic backgrounds and ages. This helped him to win the primaries in Indiana, Nebraska, and California. On the day when he won the California primary, he was leaving a victory celebration when an immigrant from Jordan by the name of Sirhan B. Sirhan fatally shot Kennedy.

The assassin was arrested at the scene and later convicted of murder in the first degree. The next day Kennedy died in a hospital bed with his widow Ethel at his side. He was buried in Arlington National Cemetery, close to his brother John who also fell victim to assassination five years earlier. Robert Kennedy is alive through his eleven children, the last one being born after his father’s death. Robert F. Kennedy, if not for his premature death, possibly could have led this country through a new era. He could have made some very positive changes. If he had lived and succeeded in his mission, he probably would have brought the United States to a greater awareness of its responsibility to the poor and the vulnerable within the society. His concern for Civil Rights and the needs of the poor were an inspiration to many Americans at that time. In delivering his fallen brother’s eulogy, Senator Ted Kennedy made a statement which many Americans still remember because it summarized so eloquently Robert Kennedy’s life: “Some men have seen things and asked why; My brother dreamed of things and asked why not?”