United States Congressman Joseph P. Kennedy II is a Democratic representative from the State of Massachusetts. He represents the district 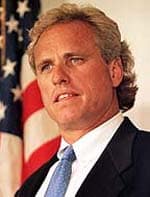 formerly represented by Thomas “Tip” O’Neil, the former Speaker of the House of Representatives of the United States. His formal education includes a bachelor’s degree from the University of Massachusetts in 1976. He is married to the former Beth Kelly and is the father of two children. His father was the late Senator Robert Kennedy of New York and his uncle was the late President John F. Kennedy. Congressman Kennedy’s political background includes a strong family history in public service. Upon his graduation, his occupation was to form a nonprofit company devoted to providing heating oil at affordable prices for the poor and the working poor. He successfully managed this company before being elected to Congress in l986.

His interests in Congress have included affordable health care, as well centering on price fixing issues in the home heating oil industry. He has also been mentioned for national office due to the prominence of his surname and his activities in the national Democratic party. Joseph Kennedy has shown himself to be politically to the left of the Democratic party in Congress. While his district includes both blue collar workers and the elite of Cambridge, he has demonstrated a commitment to liberal positions on welfare, labor issues, and taxation. If he were to become a national figure, the suspicion is that he might move slightly toward a more moderate political position in order to enhance his national appeal.